The lack of plan meant we again had no idea where to go from Salta, except that we eventually wanted to end up in Mendoza. But very soon we were getting recommendations and Cafayate seemed to be held in high regard by other travellers. So we booked a hostel, bought our tickets and set off.

The journey wasn’t very long and we arrived in Cafayate (pronoucned Cafashatey) around siesta time. The town is sleepy at busy times and at siesta time some of the roads are eerily quiet. We strolled around seeking directions until we found our hostel. 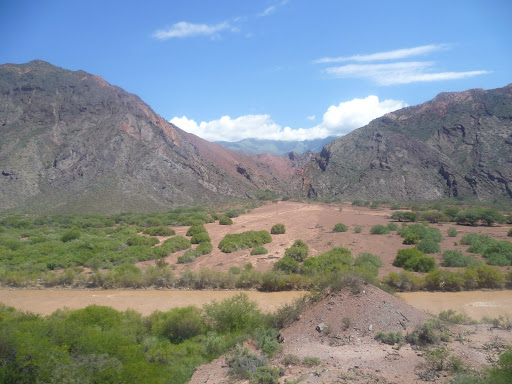 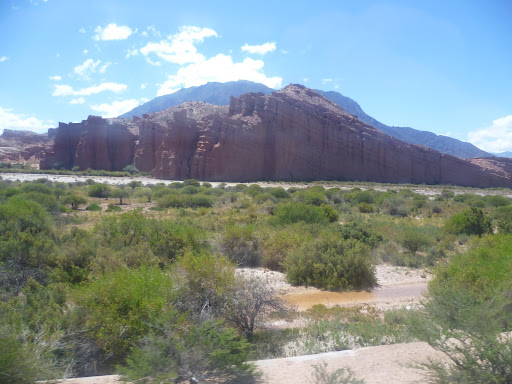 (the scenery on the way to Cafayate)

The hostel was nice, with a big airy dorm and a lovely courtyard area to socialise. We claimed our bunks and went off for some lunch before chilling out in the hostel in the afternoon. 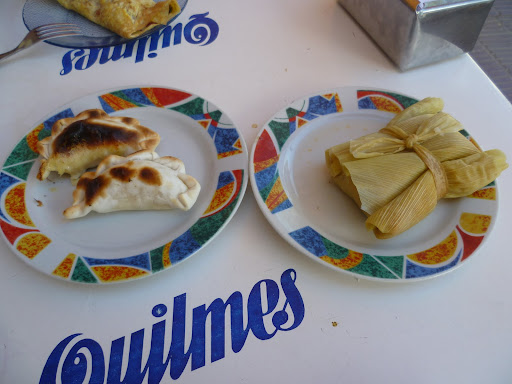 At this point I should mention that we feel we have been extremely lucky with the way our trip is going. Nothing has really gone wrong aside from the flight issues in Auckland, and that all worked out ok in the end. So in truth we were due some bad luck.

That evening we went out to eat and after leaving the restuarant (nice, cheap and slightly strange if you were wondering) we stopped at a shop and I noticed our credit card wasn’t in our wallet. I knew immediately what I had done. Here the cash machines give you cash and then pauses for 5 seconds before asking if you want anything else. I just took the cash and walked off, as I would in the UK as there I would get my card back first.

This was 2 hours previously but nevertheless I ran at full pelt accross the square to see if it was still poking out of the machine. I got strange looks, probably because nobody has ever broken into a run in super relaxed Cafayate. Of course the card was gone.

This wasn’t a huge disaster as we have 2 spare cards, one thanks to international courier Nick. But we still had to cancel the card and let our card insurance people know. This was achieved by way of 2 frustratingly painful calls via Skype to the UK. 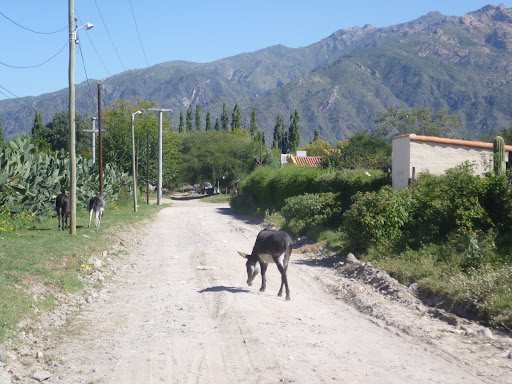 (donkeys on the loose in Cafayate)

That day we had got chatting to our room mates Andrea (from London) and Christina (a Brit who grew up in South Africa but spoke like an Aussie)  and agreed we would all go on a wine tour the next day.

We slept well despite the loss of the card and the next morning we found the police station to make a report. I fully expected this to be difficult and it was. We started relatively well and within 5 minutes they understood what we wanted. They pulled out a leather pouch stuffed with credit cards but none was ours. They then asked to see our passports, which we had left at the hostel. Claire ran back to get them whilst I was told to wait in the courtyard.

By the time Claire got back they had completely lost interest in us and left us sat in the shade watching the comings and goings. Interestingly they had a fleet of dirt motorbikes and we saw officers wearing full body armour. We eventually gave up waiting and left.

Later on the four of us met up at lunchtime to drink wine. But we had planned badly as most of the wineries had gone to sleep for a while so we grabbed a quick lunch and tried the famous Cafayate Cactus and Wine flavoured ice creams. 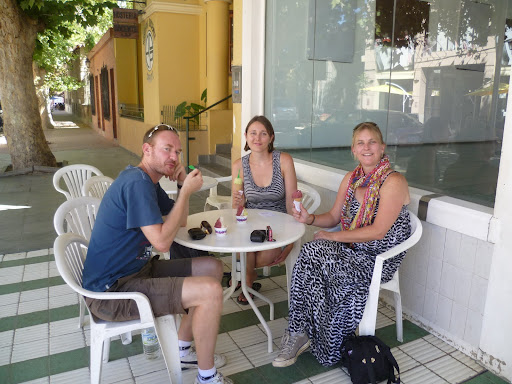 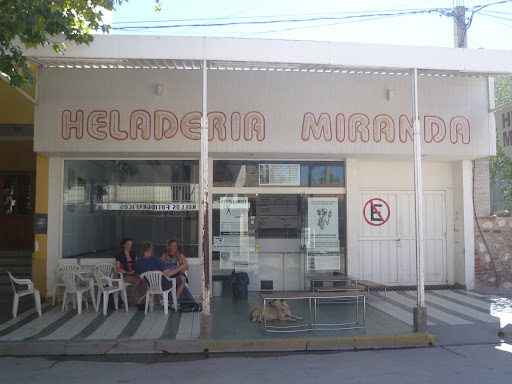 Cafayate is perfect for wine tasting. All of the wineries are within walking distance or very close to the small town. At times it is only 2 minutes walk to the next.

In the end we started to find wineries that were open and tried a few and one even gave us a short tour. As we tasted we formulated a plan to each buy our favourite bottles of wine and then drink them together that night. The last winery sold goat’s cheese so we bought some of that too. 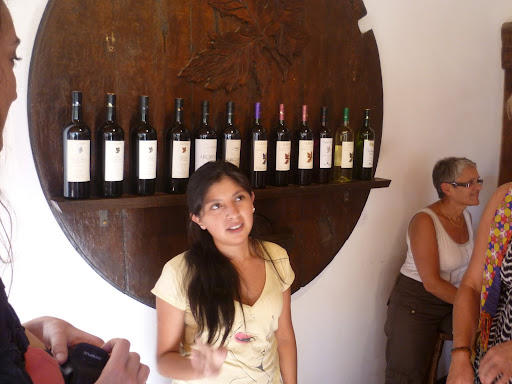 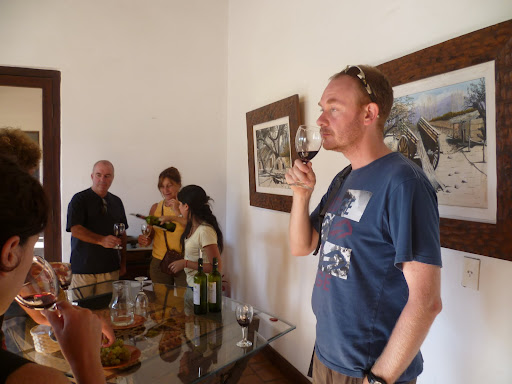 (“one is getting some water melon mixed with leather driving glove….”)

Later in the evening Mia from Germany arrived in our room so she joined us, rushing out to buy wine and snacks to add to the feast. 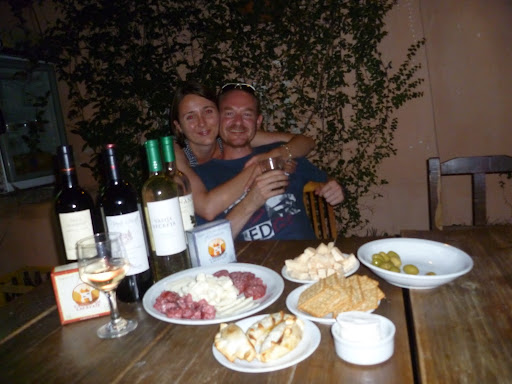 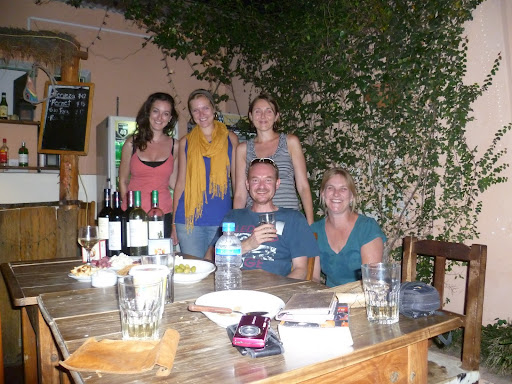 (the “Wine Guzzling Gang” from left to right….

Andrea, Mia, Us and Christina)

Then Mika from Canada arrived so he joined us too. We all drank way too much and had a great time and I yet again proved that football crosses all linguistic barriers when an Argentinan insisted I wear his River Plate shirt. 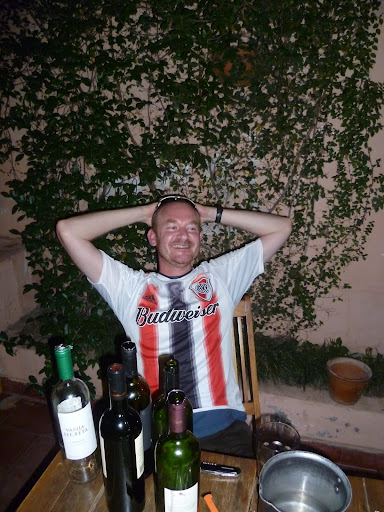 The next day we all spent the morning sitting around hungover until our respective buses were due.