We had a fantastic time in Bolivia and the country gave us quite a send off. Brass band style outside our hostel window at 11pm on our last night. The band were actually quite good, although the one tune they played became a little repetitive so we weren’t too upset when they moved off down the street after an hour or so. 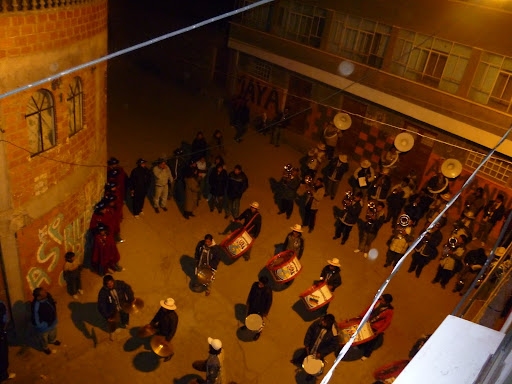 Our first destination in Peru was Cusco, which was once the capital city of the Inca Empire and is the oldest continually inhabited city in the whole of South America. It’s a great place to explore and on our first day we went on a self-guided walking tour which took in a few of the sights. We loved the city with it’s historical buildings and cobbled streets and technically brilliant Inca walls. 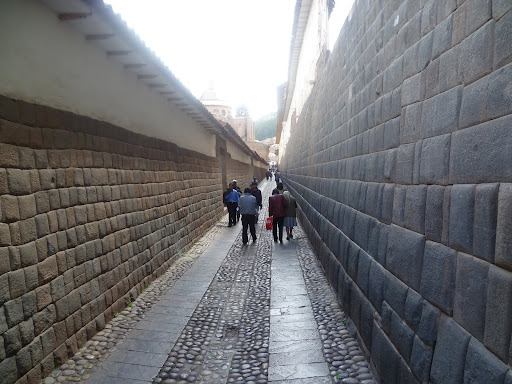 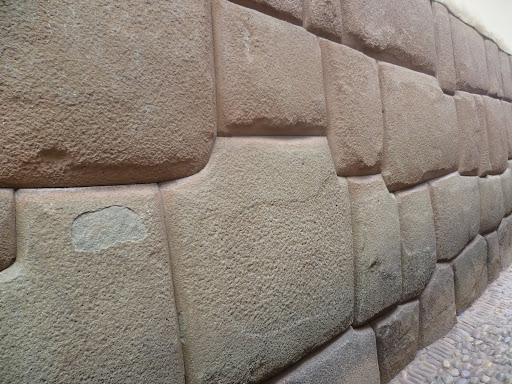 Yet Cusco also has a modern touch with flash hotels, shops and restaurants. It has to be the only city in Peru where you can see the dreaded Golden Arches one minute then around the next corner see women in traditional dress with llamas in tow. 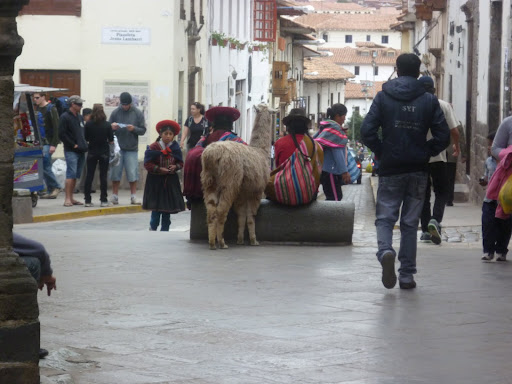 We stopped off at Mercado San Pedro during our walk. The market was buzzing and we couldn’t resist a fresh fruit drink. There were 40 or so juice bars all selling exactly the same drink at exactly the same price, which made choosing easy as we just went to the most enthusiastic sales person. 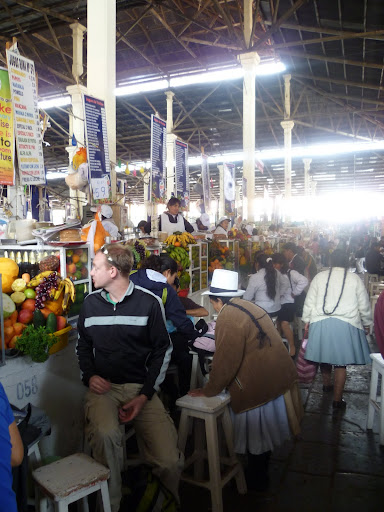 That evening we went for dinner in the Plaza de Armas and Mark took the opportunity to try a dish he’d been looking forward to for some time….”Cuy”….or the little cute furry pets we know as Guinea Pigs. Luckily, as there was only one of us partaking in this culinary delight I didn’t have to look at a whole roast guinea pig while I tucked into my yummy Lake Titicaca trout. Although this didn’t stop Mark pointing out the little leg and hip bone in his dinner and tormenting me with squeeking noises throughout the meal. Disgusting!

Mark reported that the cuy tasted delicious, like a gamier version of chicken, but I’m still not convinced.

The next day we headed to the village of Pisac in the Sacred Valley, where we planned to stay the night. We are now in the swing of travelling on the cheap so we took a local shared taxi for the 33km journey from Cusco which cost 70p each. Pisac is famous for it’s craft markets and bus loads of tourists flock in on day trips from Cusco. But for us the highlight was the Inca ruins that lie high above the city.

After purchasing a tasty treat from the local bakery we started the 4km steep climb to the ruins. It was an absolute killer and my legs hurt just thinking about it. But after 2 hours we made it to the top and the pain was all worthwhile. The size of the Pisac site was bigger than we were expecting and we were amazed at the stonework and the level of workmanship that went into building the citadel. All the stones seemed to fit perfectly together like a puzzle. There were also a number of water channels which we got to see in action. The Incas certainly knew how to build. 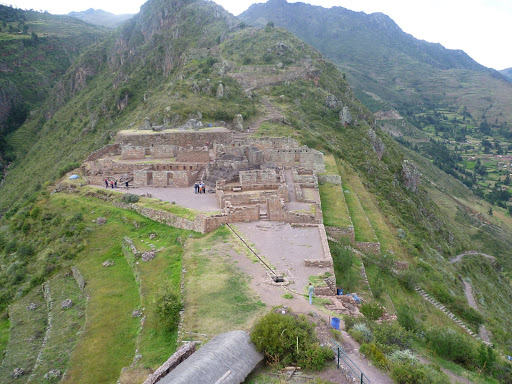 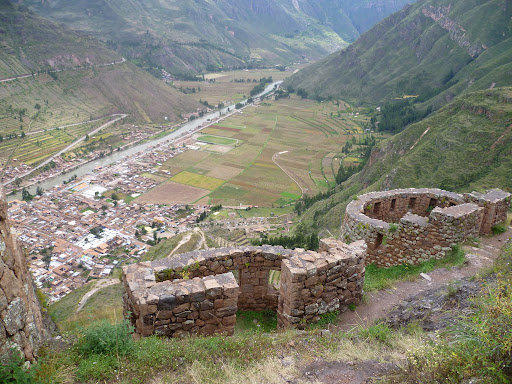 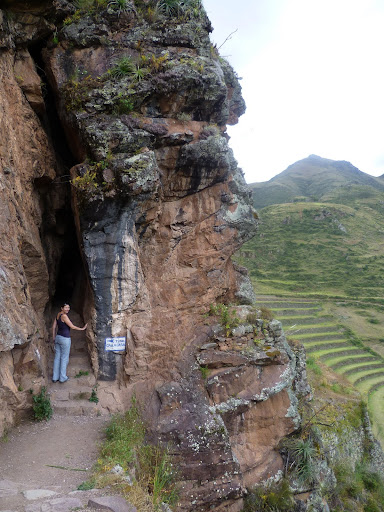 (the Inca pathway led through this cave)

Pisac also has one of the finest examples of agricultural terracing, which sweep around the sides of the mountain and really were quite breathtaking. 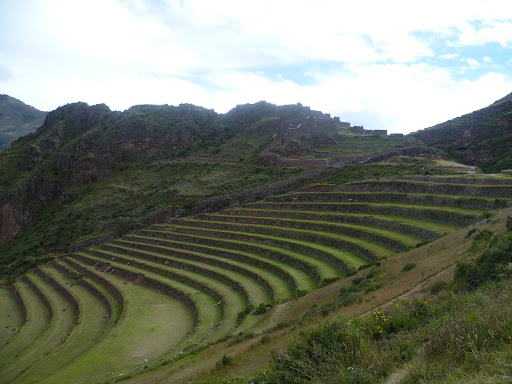 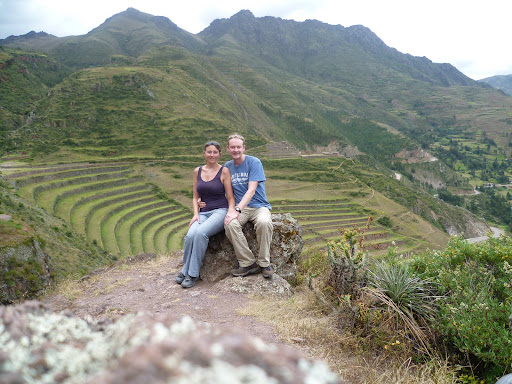 Across one of the gorges we could see lot’s of holes honeycombing a cliff wall, a quick referral to the Lonely Planet told us these were Inca tombs which have fallen victim to grave robbers. 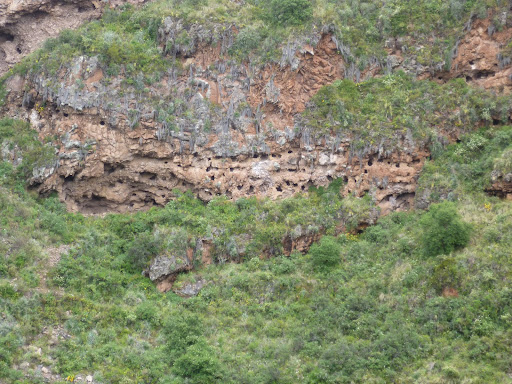 As we sat at the top of the Pisac ruins enjoying a well earned cookie, we felt quite priviledged to be taking in the stunning view and to have yet more of the Inca Empire to discover in the coming days.