There are a few different ways to get to Machu Picchu. The traditional way is to walk the Inca Trail, the original Inca route to the city. If you have read more than a couple of our blog entries you will know that we don’t do traditional by any stretch of the imagination.

Thus we decided against the Inca Trail option some time ago as it is costly and overly popular and requires too much forward planning.

Our next plan was to take a 2 night tour involving some mountain biking and some trekking. For some reason this lost its appeal as we neared Peru.

Another option is to take the train but by the time we got round to considering this we had already pretty much decided to get there as cheaply as possible. The train from Cusco is far from cheap!

Thus we started with the shared taxi to Pisac mentioned in the previous entry . From there we took a local bus to Urubamba at a cost of about 40p each. This was your typical local Peruvian bus. Despite being hardened backpackers we still looked hilariously out of place if for no other reason that we are a lot taller than your average Peruvian.

Then we hired a local taxi for less than a pound to take us further in the valley to the Inca village of Ollantaytambo. 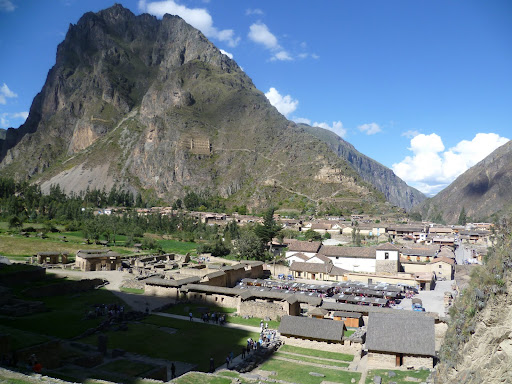 (Ollantaytambo with Inca ruins in the hillside beyond)

What remnants of our plan remained involved getting the train from Ollantaytambo but when we tried to buy tickets they couldn’t accept our chip and pin debit card. And whilst looking for an ATM we got a sniff of a better idea.

For the remainder of the day we looked at the impressive Inca Ruins at Ollantaytambo. This was another important Inca site and the extent of the ruins was again impressive, although not quite as impressive as Pisac. 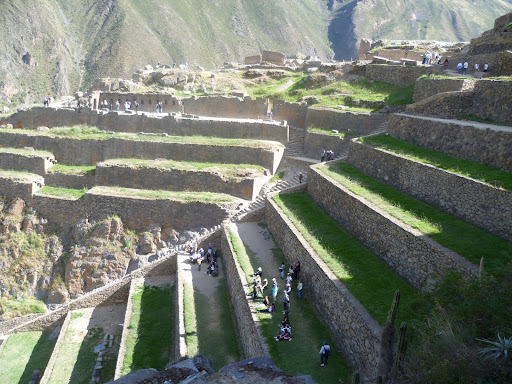 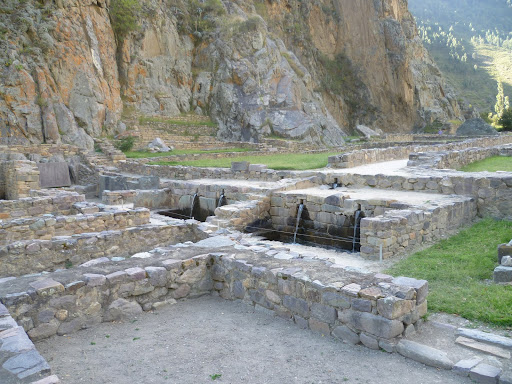 The next day we boarded another local bus to Santa Maria. Reports as to how long this would take differed wildly between 2 hours and 4. We learned some time ago that in in this part of the world that people will often tell you what you want to hear. The journey in fact took 5 hours as the bus was delayed by various road works. With the perilous mountainous road and the condition of the bus this was one of our least enjoyable journeys. 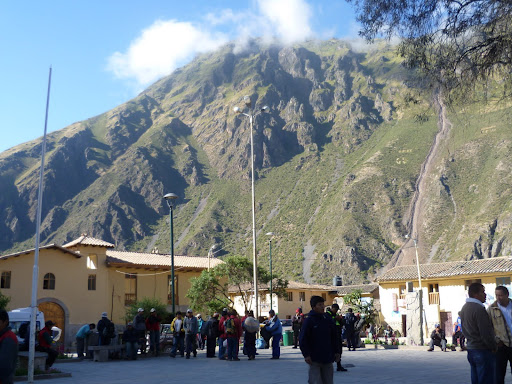 (the town centre at Ollantaytambo during rush hour)

When we reached Santa Maria we needed to hire a car to get to Santa Teresa. We joined forces with 4 other backpackers and soon struck a deal involving tactical nonchalence. £2.00 each for another 2 hours of driving. Some other poor chap was thrown out of a taxi to make room for us. Ruthless stuff. 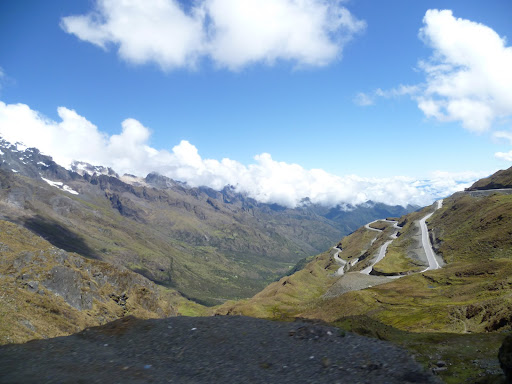 The road between Santa Maria and Santa Teresa was frightening. In fact had we known we wouldn’t have even considered it. The road was dug into the side of a mountain and for most of the drive a perilious vertical drop was just feet from the car and and a vertical cliff face towered above us. Add to this that our driver was at least 75 and appeared to be startled by the appearance of oncoming cars made for a nerve wracking 2 hours. I was in the front and sat perched ready to grab the wheel at any moment. 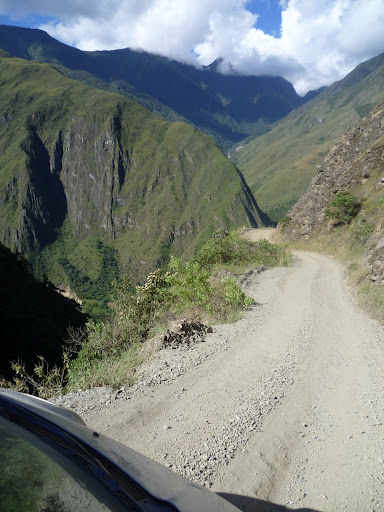 Nevertheless we arrived safely at Santa Teresa. The next leg of our journey was to walk to the hydro electric power station. Luckily our driver offered to drive us there for another £1.00 each which we luckily accepted. This drive took another hour and would have been a hellish walk…despite us being assured it was an easy short walk!? 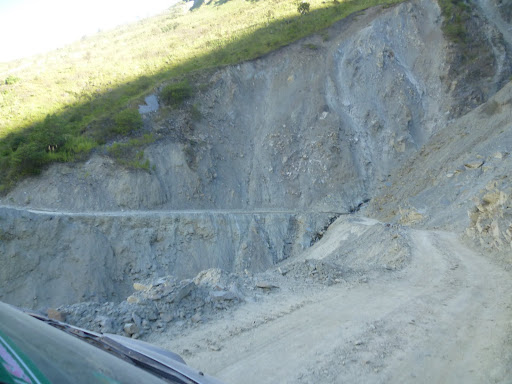 The final leg of our now understandably cheap plan was to walk along the train tracks to Aguas Calientes, the town below Machu Picchu. Despite the heat and thin air this part went nicely to plan and a couple of hours later we arrived at “tourist central” just after sunset. 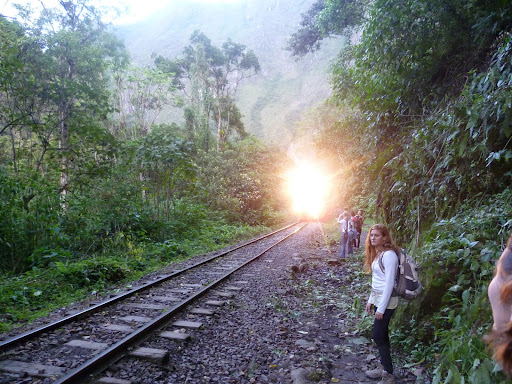 (The train is coming!)

Total cost…virtually nothing. And a great (if scary at times) experience to boot.