After journeying through the Andes and beyond for 3 weeks we decided we wanted to relax on a beach for a bit. We chose Mancora in the tropical north. Our time there would be plenty relaxing but would nearly end in disaster.

The journey to Mancora was one of our best. The bus was the best money can buy in Peru. Whilst we were too late to get the full on bed seats, we did get “semi-cama” seats. The films all had English subtitles and the bus even had wifi. Very impressive.

That said we still arrived in the sweltering heat of Mancora in desperate need of proper sleep.

Accomodation in Mancora was hard to book but we opted for what sounded like the least noisiest party hostel. Upon arrival it seemed pretty good. It was right on the beach, had a nice pool and a bar. And the beach bungalows looked great.

Sadly we were greeted with “how did you make your booking” and a confused look. The four bungalows were all occupied and we had to go in a dorm. But then they offered to keep the dorm empty aside from us. Which seemed a fair compromise.

After catching up on sleep we tried out the excellent pool and the fantastically warm sea. Then we decided to order some food. At this point the strange nature of our hostel started to reveal itself.

Some scene setting is needed. This place had capacity for around 60 guests, but it is the quiet season and at most there were 12 guests the whole time we were there. Despite this the place appeared to have around 20 staff. 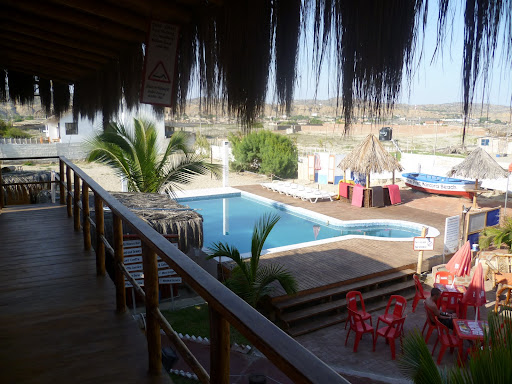 Claire went to ask for food and was told by the Bar Manager, a chubby English chap that “given the choice between our food and death, I would probably choose death”. He did relax his slightly extreme and rather counterproductive attidude a little when he admitted that the burrito wasn’t bad. We then tried our luck on one of the plethora of fruit smoothies painted on the huge drinks board, but they couldn’t make any of these as the blender had been broken for some time. By this point we had decided to eat in town.

The town of Mancora is a bit of a dive. Dirty and run down with lots of eateries all serving pretty much the same food. We ate at one and it was ok. We then headed back to our hostel.

During the afternoon we got chatting to an English couple who told us that the staff had a special agreement with a local chemist and were thus able to buy 2 valium for around £2. This did explain a lot because the whole place was rather laxidasical.

The English couple were in one of the beach bungalows and they explained that whilst they looked good from the outside they were actually pretty naff. Although there was a toilet and shower they weren’t plumbed in, so every time they needed the toilet or a shower that had to walk along the beach to get to the hostel. We were now extremely happy with our private dormitary 10 seconds walk from the showers. 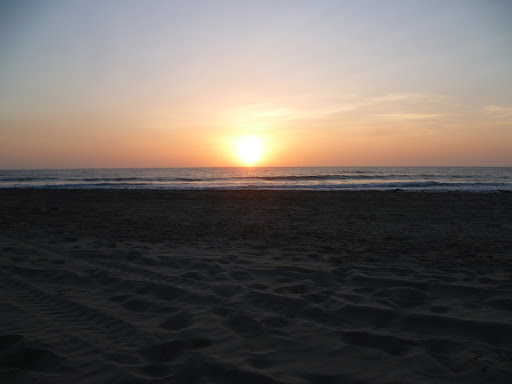 (a Mancora sunset…swiftly followed by sandflies)

That night we ate again in the town and then went to bed early. The staff however partied late into the night, though their music was no match for our earplugs

The next day was amusing. I got up around 8:30 and headed down for the free breakfast. The bar was deserted though over the next 90 minutes various other guests appeared and we all sat around waiting. At 11am an American employee appeared looking seriously hungover (or maybe drunk. It was hard to tell behind the massive sunglasses) and began to rustle up some food. All of the guests were incredibly polite given the 2 hour wait but nevertheless she snapped at anybody who dared to speak to her.

We ordered fruit salads to compliment our bread roll. As the American girl brought them to us she picked fruit from the top and ate it. We watched her walk all the way to us doing this. We are way beyond complaining about such things though and just laughed. 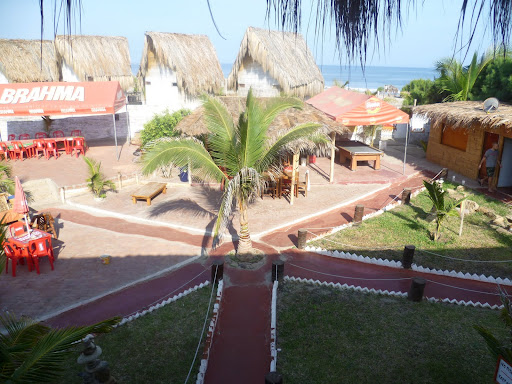 For the rest of the day we relaxed and then in the evening the English couple invited us out to eat with two Aussies and an American guy, Adrian. We ate at a superb Thai restaurant. It wasn’t the Mong Bar on Hat Khlong Nin beach but it was good nevertheless.

Adrian amused us by telling us about our hostel’s approach to bringing booze into the hostel. He happened to have a bottle of Pisco with him when he arrived but was “caught” drinking it in his room. He received a condescending dressing down made all the more amusing by the fact that most of the booze the hostel claimed to sell they didn’t in fact have.

The next day we again spent more time lounging around getting sunburned. On our way back from lunch in town we saw an English girl who worked at the hostel. She was running around the beach looking a little deranged. As we arrived back at the hostel she did too and, out of breath, she explained that somebody had stolen her shoes 1 month ago. As such she couldn’t leave the hostel because the ground gets so hot in the daytime in Mancora. At best she could run between shaded areas to avoid burning her feet. Though this was not as traumatic as one might think because she then explained that she was always drunk and when drunk her feet don’t get burnt.

That night I heard from Sandy (from the Pachamama Bus and the Salt Flat tour…and Isla De Sol). He was on a wifi equipped bus from Cuzco to Lima which was stuck due to protests. The journey took him 39 hours instead of 18 or so. I gave him a brief overview of our fantastic accomodation and he immediately decided to come and join us. He’s a pretty easy going traveller and despite its shortcomings our hostel ticked the important boxes for him…English speaking with beer.

The next day we can barely remember we were so relaxed. Breakfast was on time. Though the hot water flask was missing. When I timdly pointed this out to the girl with no shoes she responded “breakfast technically doesn’t start until 9am”. It was 8:58 am at the time and everything else had been brought out and served 15 minutes ago.

By this time just about everybody who was staying at the hostel when we arrived had left to go to other hostels. Most people seemed to get really stressed about the terrible service but we and Adrian found it hilarious.

The next morning Sandy arrived and we spent a couple of hours catching up. We then showed him and a Kiwi girl Renee where to eat cheaply in Mancora. We then spent the rest of the day by the pool where Sandy demonstrated how to jump in the pool and soak a sunbather. Claire was the sunbather. Oh how I laughed as around 10% of the water in the pool landed on her.

That night we headed into town with Sandy, Renee and Adrian. Adrian had been trying to get a tuk tuk driver to let him drive a tuk tuk for a couple of days. Having teamed up with the equally keen (and mad) Sandy they were soon actually having a go at driving a tuk tuk. Sadly for them they couldn’t start it.

Again we ate in the Thai (it was so much better than the Peruvian food) before commandeering 2 tuk tuk’s to get back to the hostel. Myself, Claire and Renee were in one whilst Sandy and Adrian again set about persuading their driver to let them drive. Amazingly the driver was keen and Adrian was soon in the saddle.

(a typical Mancora tuk tuk. We had no kayaks)

We set off first and our driver clearly thought it was a race. The three of us looked back to see the hilarious sight of Adrian hunched over the handlebars and Sandy hanging out of the side of the tuk tuk, travelling at speed and gaining on us, whilst the tuktuk driver sat in the back wondering what he had done. You can sense the disaster coming can’t you!

As they continued to gain on us the traffic got heavier. The traffic in Peru is generally pretty manic. Adrian was at this point probably going at least 40mph when another tuk tuk swerved into his path. He pulled the brake lever but nothing happened. The brakes didn’t work and as he turned to avoid hitting the other tuk tuk one of his rear wheels went into the drainage ditch at the edge of the road. The last thing we saw before a van obscured our view was their tuk tuk careering from the road and hitting a concrete building and a lamppost before turning over in mid air and crashing down onto the crowded pavement.

Not suprising we all screamed (as did they I suspect). We got our driver to stop and I jumped out and ran back down the road at a speed I didn’t think I was still capable of.

When I arrived a small crowd of locals were huddled round the tuk tuk. I pushed my way through and was relieved to see Adrian on his feet and looking OK but dazed. Then Sandy was hauled from the tuk tuk. Amazingly he had no obvious injuries despite hitting his head. The tuk tuk driver was fine too and no bystanders had been hit. Within seconds 10 police officers appeared and Adrian and Sandy were dragged forcibly away. I was somewhat thrown by the speed and size of the police response (I’m from the UK after all). At first it seemed that they were dragging the two of them into an alleyway so I decided to try and follow just in case they were going to get a beating. What a photo that would have made!

All then became clear as we all found ourselves in the police headquarters. Adrian had crashed right opposite the police station.

They were ushered into an interview room with the tuk tuk driver. Conveniently the window was open onto the street so we stood outside and listened. I couldn’t understand what was going on though but I could hear Adrian speaking Spanish and a fair bit of shouting was coming from somebody. Throughout this Sandy kept turning round and giving us the thumbs up out of the window, clearly not fazed by the experience.

After a while they were dragged off again and we thought they had been thrown in cells. But Peruvian justice doesn’t seem concerned with such nonsense as arresting people or time consuming paper work. There were in fact all looking at the mangled tuk tuk. Adrian tried to bend the ruined forks back into shape before it was agreed that he would pay (after negotiating) US$100 to the tuk tuk driver. 10 minutes later they were free men.

We all headed back to the hostel to debrief.

The next we jumped on a bus to head south, bidding farewell again to Sandy who now seems to have absolutely no plan at all.