The city of Battambang was recommended to us last time we were here but at that time the lure of Thai beaches was too much. But this time we had no excuse as it was en route to the Thai beaches.

We paid the almighty sum of £4.50 each to travel the 4 hours from Siem Reap to Battambang. We got the hotel to book the ticket but had we arranged it ourselves we would no doubt have been promised a luxury modern air conditioned toilet toting bus. But we would have known that such a bus didn’t exist, unlike the British father and daughter at the bus station. 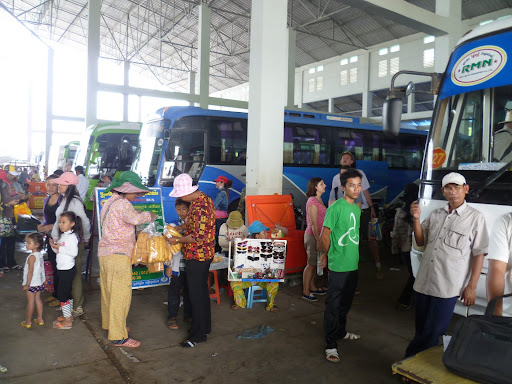 The daughter was mildly ranting at the bemused ticket checker (that’s him with the white cap) when we arrived. Her admittedly rather valid concern was the lack of toilet and the state of the bus.  I offered some calm words and defused the situation. Then I told her about one of our Bolivian bus journeys. Eighteen hours with no toilet and children sleeping in the aisle is an experience that will remain with us forever I think.

This was a proper local bus with just a smattering of western travellers among Cambodians. A family of 5 sat in the two seats across from us. The father had only one leg (land mine again no doubt) was sat with his wife and 3 daughters aged around 2, 4 and 6 I would guess. They were great fun and I exchanged a few funny faces with one of girls. Previous experience means we now carry sweets and lollies, so we handed some over which they loved.

Somewhere around half way to Battambang (pronounced Baddambong. I got blank looks until I realised this) we stopped for lunch. After a visit to the obligatory hideous squat toilets I considered trying a deep fried grasshopper. I bottled it though. I never even thought about munching on a battered and deep fried freshly hatched chick though. 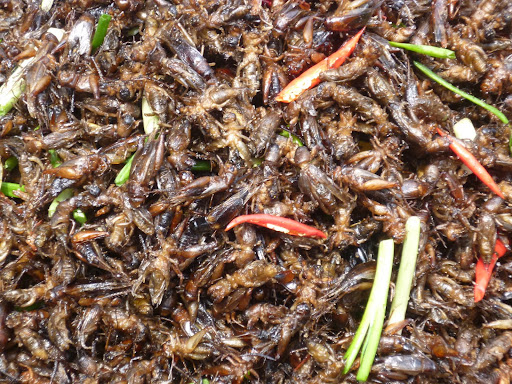 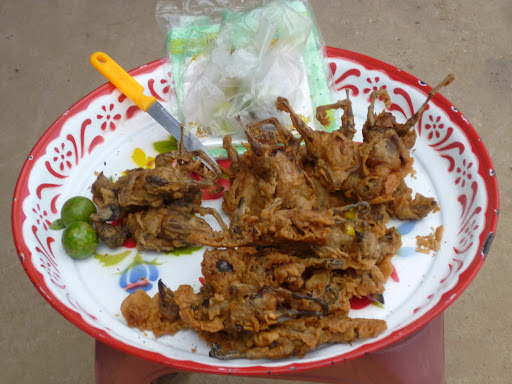 After that things progressed smoothly and we arrived in Battambang by mid afternoon. We had booked a hotel through Booking.com but did no more than this, so we were surprised to see a guy within the waiting crowd waving a card with my name on it. We worked our way through the huge shouting clamour of tuk tuk and taxi drivers and eventually found him. He was the tuk tuk driver stationed at our hotel it transpired. The fact that he had my name seemed to ensure this wasn’t a clever ploy on the part of some cunning opportunist.

This situation demonstrates two things about Cambodians which endear them to us so much. Firstly, what a wonderful thing to do for somebody. Its 35c in an unfamiliar city and 30 drivers are competing for our attention. In this situation it is very hard to know what to do as a traveller arriving in a strange place. Secondly Cambodians all seem so keen to work so hard to make money to better their lives. Sam, the tuk tuk driver didn’t know when or where we were coming from or by what means. So he had made his way between bus station and boat port waving the card in the hope that he would find us. Amazing.

When we got to the hotel he didn’t even want any money. His hope, which was realised, was that we would book an all day tour with him for the almighty sum of US$20, plus what we always add on because we bluntly refuse to employ somebody for a whole day for so little money.

The city of Battambang is a funny place. The French, when they ruled over Battambang built lots of French looking buildings. But aside from that it is pure Cambodia. 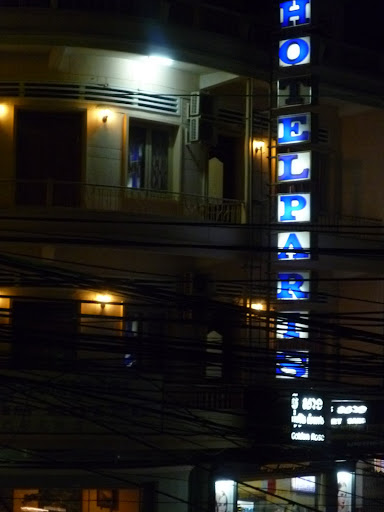 The city itself doesn’t seem to have much to offer. The big attractions are out of town so the next day we arranged to set off at 8am with Sam on the standard tour circuit.

First stop was the Bamboo Railway. I have been mumbling about wanting to see this to various people in the UK for a while. I doubt any of them listened though.

In the French Colonial era the French built railway lines including a route from the capital Phnom Pehn in the south to Battambang further north. Most of the line is now out of service but a group of people have kept a short stretch open. On this stretch they run their own home made trains which consist of a small bamboo platform which sits on two axles and wheels. The train is powered by a scavenged petrol engine taken from a generator. 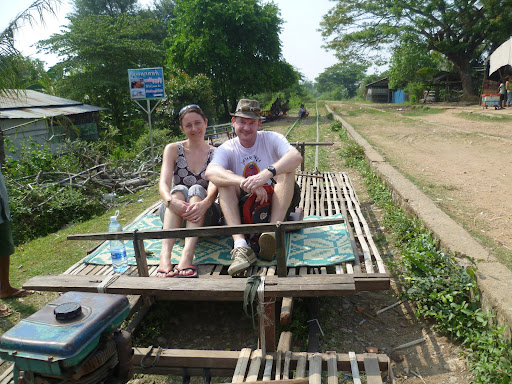 Whilst I am sure these services do serve the local people I suspect most of their trade comes from tourists. So much so a Tourist Police Officer was manning the station when we arrived. We paid US$2 each for the short return trip and very quickly we were hacking along at 40kmh and getting worried. The lengths of rail mostly don’t quite line up which doesn’t make for a smooth ride. But it is incredible fun nonetheless.

We soon arrived at a small settlement which looked to be on the site of an old station. We were ushered to a tiny shop and fed fruit and sold drinks. Four kids immediately came and sat with us and soon offered to show us around. 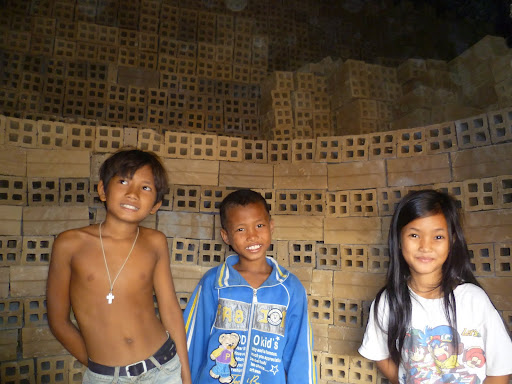 The settlement was based around a brick kiln which we had a thorough tour of. The bricks are made from clay taken from the local fields. Rice husk is burned to heat the kiln and then the ash is used to fertilise the earth to grow more rice. All quite impressive.

The 4 kids were brilliant fun and their English was great. So much so we could have some pretty good conversations. The girl in fact even spoke a little Spanish so we practiced together for a while.

As we walked they were making things from the local plant leaves. Like origami is the best way I can describe it. Grasshoppers and stars seemed to be their favourite. By chance I had bought some stars made in exactly the same way but in bright coloured plastic. We bought these from a kid at one of the temples at Angkor. I handed this over and they split them up between themselves. 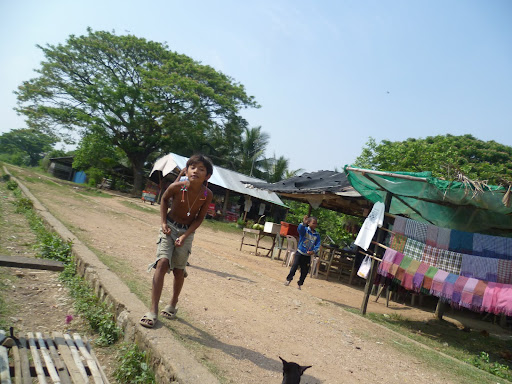 After around 10 minutes one of the boys decided it was time to set out the terms of our tour. US$1 for each of our tour guides. A bargain which we supplemented with some sweets.

One of the novel things about the bamboo train is that there is only one track, and thus trains moving in opposing directions have to decide who will get off the tracks. On the return journey our train had to be dismantled and flung to the side to let another through.This took a matter of seconds, though the wheels did look very heavy! 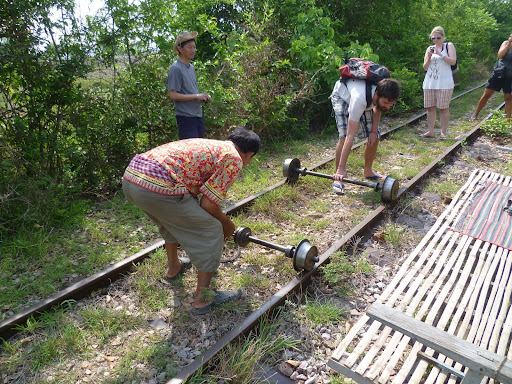 After the bamboo train we tuk tuk’d cross country to a winery. In fact this was apparently Cambodia’s only winery. We had a quick stroll through the vineyard and then sampled some of their wine (not great), brandy (tasted like brandy), ginger cordial (excellent) and grape juice (delicious). 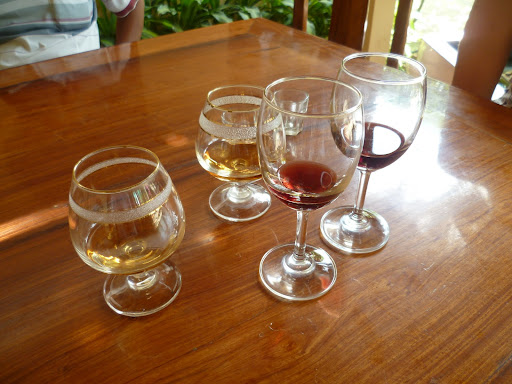 After this Sam took us to see the Wat Banan temple. This was much like some of the smaller temples we saw at Siem Reap, though at Siem Reap we didn’t have to climb up a small mountain! Sam sat at the bottom and relaxed whilst we struggled up the steps in the incredible heat. In all honesty, having come from Siem Reap it really wasn’t worth the climb though the view was impressive. After this we pressed on to another temple on a large hill. Before climbing we had some delicious lunch in the form of Lok Lak Beef, and then negotiated a ride each on the back of a motorbike to get to the top.

This hill was a sobering experience. Atop the hill is a Buddhist temple and a deep cave known as “The Killing Cave”. During the Khmer Rouge years prisoners were brought to the temple and incarcerated. Their crime was nothing more than being educated or perceived as a thread to the Khmer Rouge. Their punishment was to be hit over the head with a big stick or the butt of a rifle and pushed over the edge and into the cave. A drop of around 25 metres. Most died from the fall. Those that survived died of starvation, unable to escape the cave. 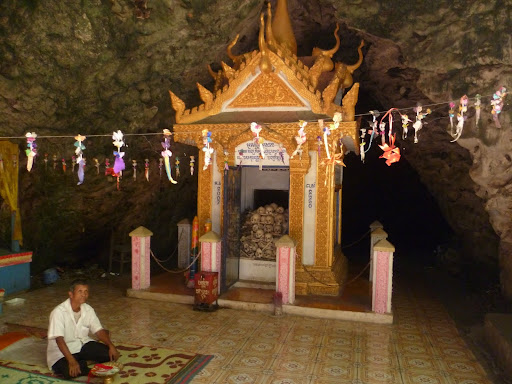 I am sure we said similar in our last blog entries from Cambodia, but what happened to the wonderful people of Cambodia under the Khmer Rouge is heartbreaking. It is estimated that a quarter of the population were killed or died from overwork, starvation or illness. Some even killed themselves to escape the terror. It is incredible that despite this being in living memory of so many Cambodians, the country is so amazingly friendly and welcoming. This visit completed our day and we headed back to Battambang to jump in the pool and cool off.

That evening we attended the Circus. This comes highly recommended but I think we caught it on a bad night. The 6 performers were clearly very talented but whoever choreographed their performance is less worthy of praise.

The next morning we set off for Thailand. This was to be our most ambitious journey of this trip. We took a taxi to the border. This bit went well though we did wonder why we were the only people not holding reams of paperwork. It transpired that everybody else was on a visa run. They were crossing into Cambodia for the sole reason of getting a new visa as they returned to Thailand. Below is the exciting border at Pailin. 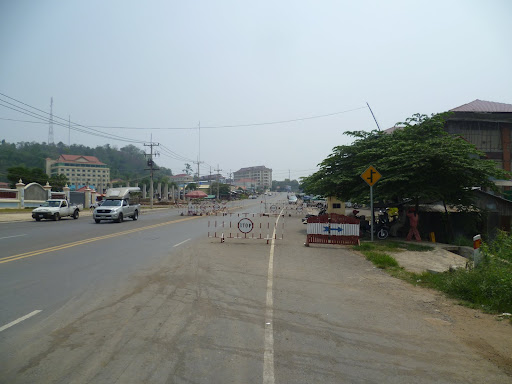 We then negotiated a taxi ride to the Thai town of Chantaburi. Our guide book told us that from here we could catch a minibus to Ban Phe. Sure enough our taxi dropped us off near the market and mini buses were waiting. However it seemed they would only drop us at the main road and we needed to get to Ban Phe pier. There was talk of motorbikes waiting for us which wasn’t appealing as Claire’s backpack weighs the same as a small adult. But we climbed in and went for it anyway.

When we were pretty much ejected from the minibus we could see no motorbikes, taxis or anything. I shouted to the driver and he pointed us down a road. So we started walking. At this point we didn’t realise that we had a good 3 miles to walk in blistering heat.

After a couple of minutes a tuk tuk drove past and Claire hailed him. We climbed in and set off. The driver was an old guy and whilst friendly he spoke no English. We don’t think he was actually on duty as he had to drop into his depot to grab his helmet. When we arrived at the pier he refused to accept any money and I even resorted to trying to chase him with some notes but he was having none of it. What an absolute gent.

We had a 30 minute wait for our boat so we jumped into an Irish type bar for some food. Our first since breakfast 7 hours previous.

Our destination was the island of Ko Samet where we had no accommodation booked. Luckily our first choice, Tubtim Resort had rooms free and 8 hours after leaving Battambang were were lying on our bed enjoying air con. 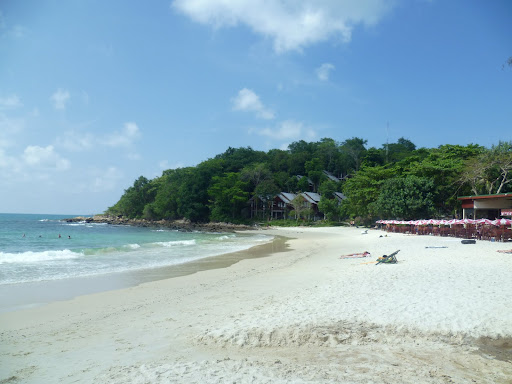