We caught a taxi to Agadir bus station but after some awfully confusing French conversation (they speak French in Morocco as well as Arabic and Berber) we discovered the next bus south didn’t leave for 3 hours. So after buying the tickets we jumped back into another taxi and went back into Agadir for some lunch. Then we caught another taxi back to the bus station.  Eventually our bus arrived and we were on our way to Tiznit, which was as close to Mirleft as we could get by bus.

The journey took around 4 hours and we were eventually deposited onto a street which seemed a world away from Agadir. It was immediately obvious that Tiznit is a place where religion is taken very seriously and tourists are rare. The women in Tiznit seemed to favour the full veil, a noticeable contrast to Agidir. I suddenly felt very naked at 6’3″  in my shorts and t-shirt.

We flagged a taxi driver down and he told us we needed to catch a Grand Taxi to Mirleft. He dropped us at the place where all Grand Taxis depart, a huge dusty square containing endless Mercedes 240s. We had done our research so knew how the system worked. In Morocco there are two types of taxi. The Petit Taxi (a small car) which operates within a small area, and the Grand Taxi which undertakes longer journeys. We came to realise that Grand Taxis are always beaten up old Mercedes 240s. More troublingly we came to realise that Moroccans think Mercedes 240s are suitable for seven adults. It is best to just liken them to buses actually.

Soon enough we were hustled into a Grand Taxi along with the driver and 4 other fully grown adults. Claire almost had to take a run up to get in. She ended up pretty much sat on my lap whilst I had my shoulder pressed into the face of the guy next to me. Nobody seemed at all fazed by this though. Our driver was clearly a man in a hurry, and my fear was compounded by the fact I could barely see our impending doom past the two men sat on the passenger seat in front of me.

The shared-taxi system is something we first came across in Peru, though theirs are less crowded. It makes perfect sense when public transport doesn’t exist and by cramming so many people in one car the cost is shared. I doubt the safety record is great but what the hell.

As the sun was setting we arrived in Mirleft and stood in the middle of the dusty street hoping to see a sign directing us to our lodgings. We had no such luck but after 20 seconds a guy started to offer help. Sadly our first instinct is to not trust such immediate and enthusiastic help but little did we know that we were speaking with Ahmed Speed. Another guy who looked shifty told us we could trust Ahmed, and with such an excellent recommendation we agreed to follow him off down a dirt track.

As we walked he fired endless questions at us in what was pretty good English, albeit spoken so quickly that it took me a while to understand. He led us for a good 15 minutes until we arrived at Aftas Beach. We tipped him for his help and grabbed a photograph. 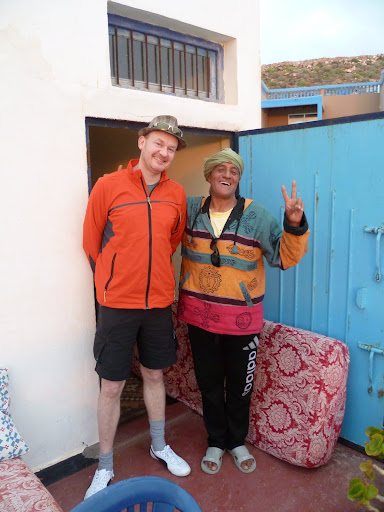 Whilst I love all aspects of travelling, what I crave the most is an idyllic beach setting. And this craving is what drew me to Aftas Beach, which is a tiny beach with just a handful of buildings from which to watch stunning sunsets. 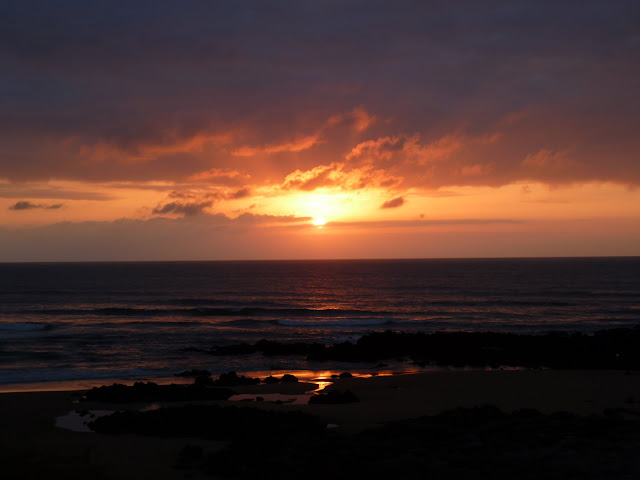 Hopefully you will recall that in the world of ClaireandMarkGoTravelling the sea often slopes.

We stayed at Aftas Beach House which is a pleasant guest house run by Brenda from the UK. It has a great balcony overlooking the stunning little beach. On either side of Aftas Beach House are two “restaurants”, though both were so laid back that it felt more like eating at someones house. Both cooked tagines though and we were happy to try our first genuine Moroccan fare. 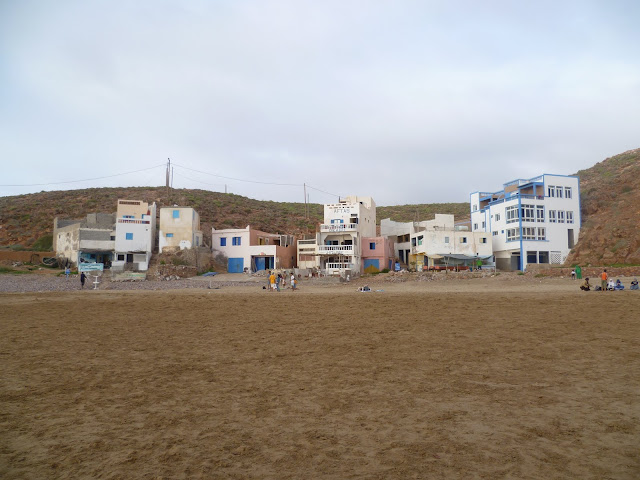 The following day we went in search of Legzira Beach. This was the reason we first started to think about travelling to Morocco, having seen some amazing photographs of the beach in a magazine. To get there we needed to catch another Grand Taxi. We grabbed breakfast in a cafe and I got to try a Nos Nos Coffee. Delicious and very milky and sweet, but not as good as a Vietnamese Coffee. 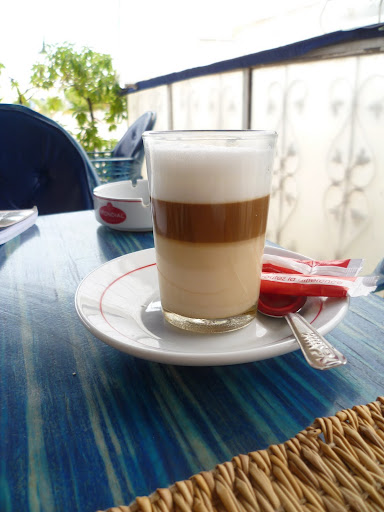 After standing around for a while and conversing with locals we crammed into a Mercedes 240 which proceeded at great speed before ejecting us in what seemed to be the middle of nowhere. We could see the sea though so headed in that direction, past a building site and down a steep sandy track. We got to the beach and turned left past some restaurants to be faced with this. 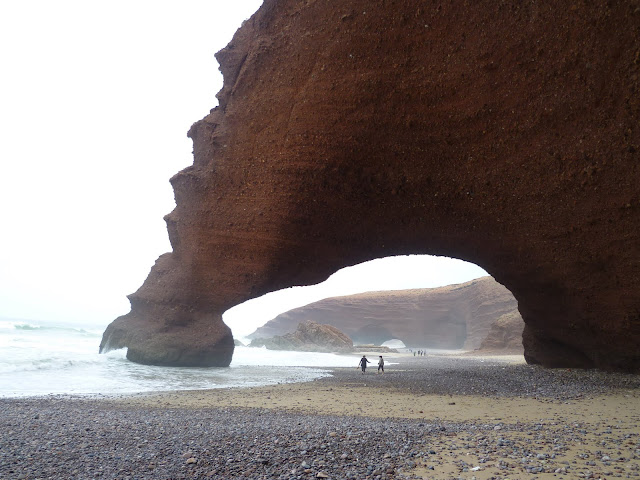 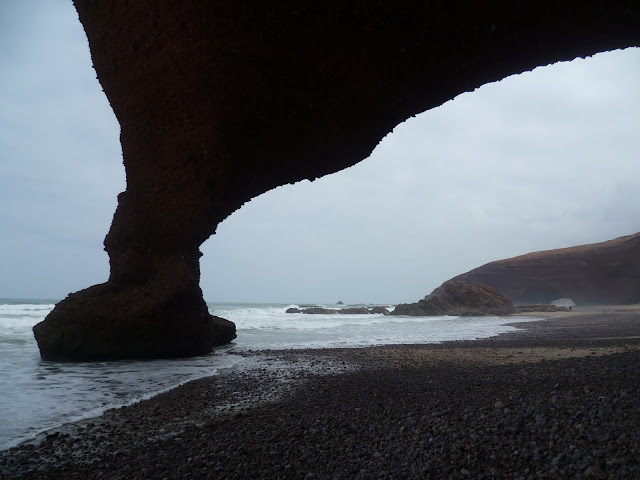 The huge eroded arches were pretty awe inspiring. We walked the length of the beach spending as long under the arches as we dared. The rock didn’t look too solid! And of course the sea was sloping quite severely at times.

After that we headed back up to the road, which incidentally really was in the middle of nowhere. Brenda had instructed us that if a Grand Taxi didn’t pick us up some other car would. We expected to be sat waiting for hours on end in the blazing heat with no shade, but amazingly within 15 minutes a Grand Taxi which was virtually empty with only 5 fully grown adults in it stopped. We paid a pound each and headed further south at eyeball bulging speed to Sidi Ifni.

Sidi Ifni was Spanish until 1969 and was essentially their outpost on the edge of the Sahara. The Art Deco buildings are beautiful and we spent a few hours looking around before eating fresh fish overlooking the Atlantic. 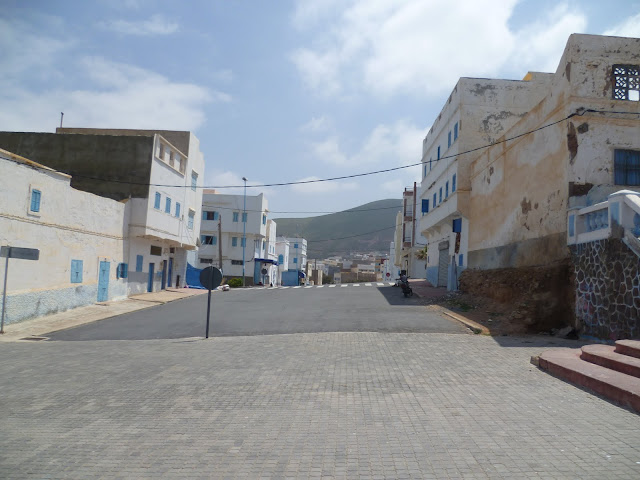 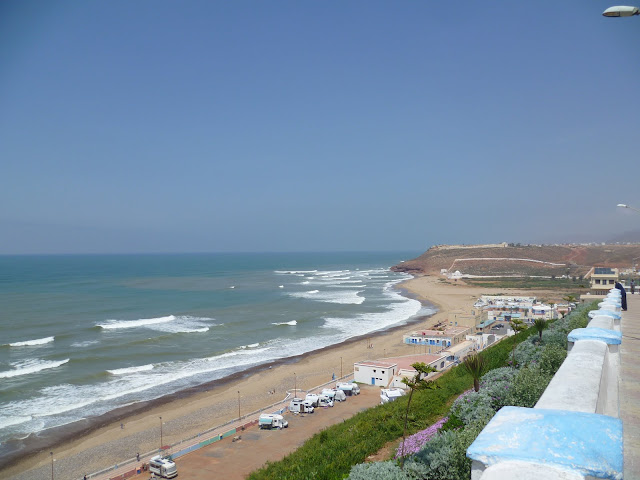 After stumbling upon a shop selling delicious miniature cakes we returned to the Grand Taxi depot and spent more time sat around waiting for our taxi to fill. It is actually possible to buy more seats to get these things moving but we couldn’t be bothered to try and explain this. So  I just sat on a wall looking at an array of Mercedes 240s and attracting the attention of crazy people. 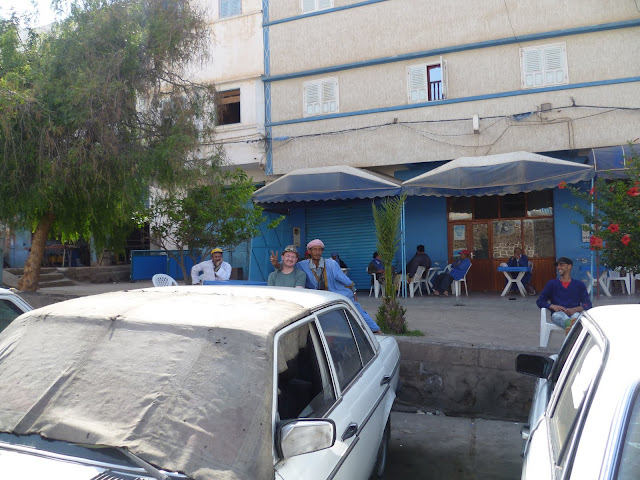 After enduring an hour of yet more crazy driving (wrong side of the road on corners whilst on the phone for example) we eventually made it back to Mirleft and had a pleasant evening at the restaurant next door. The owner spoke good English and told us that he spent time in Europe as a musician and then started talking about Bob Marley who supposedly visited Mirleft with Paul Young. Soon we paid up and went back to Aftas Beach House to chat with Brenda before going to bed.

The next day we had another ambitious day of travel planned.