Marrakech is an absolutely amazing city but it took a while for me to appreciate its charms. After 5 hours I was half tempted to leave and never return in fact.

Upon arrival we found a petit taxi to take us to our Riad. It wasn’t possible to drive all the way to the Riad though so we had to pay a child to lead us through some alleyways and a spice market to get there. We didn’t get a great welcome and after keeping us waiting they eventually plucked up the courage to tell us they had intentionally given our room to a group booking, presumably because they were paying more for the room. Refreshingly honest but sometimes a lie seems more sensible.

We pulled our very best not happy faces and the guy offered to escort us by taxi to another riad. So we set off across the city and eventually arrived at this other Riad. We checked in and in fact it turned out to be ok. And I dealt some revenge on the other riad courtesy of a Tripadvisor review (which was then removed – don’t trust Tripadvisor).

And just in case you are wondering what a riad is, it is a traditional Moroccan house with an internal garden courtyard type thing. Ours had a little pool in the courtyard.

After checking in we set out to explore. Marrakech is a nightmare to navigate. Maps are pretty useless and somebody stole the street signs. But despite this we found our way to the famous square Djemaa-el-Fna. It’s famous for a very good reason and if you ever go to Marrakech I suggest you don’t make you first visit to Djemaa-el-Fna at night in the dark. I will try to set the scene.

The square is immense. In the middle are some temporary restaurants from which smells and smoke emanate in all directions. Around these restaurants are some orange juice sellers who will freshly juice some of their oranges for a few pence. And everywhere else people are selling things, performing and dancing. And all around them thousands of people are crammed in trying to navigate and stretching their necks to see what is going in within each little crowd. We saw all sorts of weirdness including a boxing match between a man and a woman! It is highly impressive and a real assault on the senses. But after a day of travel and our riad-related woes it nearly tipped me over the edge.

We ate some food including the best olives of the trip thus far, had a look around and then retreated back into the alleyways and to our Riad. I went to bed a gibbering wreck. I have a track record of struggling with major cities. It takes me a while to adapt.

The next day was my birthday and I had pulled myself together so we set off to explore properly. First stop was to arrange a Hamam, which is a Turkish bath of sorts. They do them in Morocco too. Then we headed to Jardin Majorelle. Claire loved this but it bored me senseless. Undoubtedly more boring than the previous most boring thing I have ever done, which was touring a nunnery in Bolivia. But enough of my cultural incompetence. These gardens belonged to Yves Saint Laurent and his ashes were used as fertiliser for a mind numbing array of cacti and other flowers and stuff.

I am not completely against this sort of thing. I love Dunorlan Park in Tunbridge Wells for example. But this place was tiny and crawling with tourists. There were buses parked outside which had presumably dumped the many tourists we encountered at the gardens too. Here is a photo. 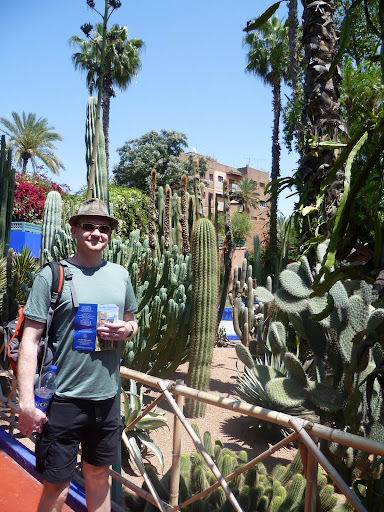 Next we headed back to Djemaa-el-Fna which is a much different experience in the daytime. It’s still bonkers and crowded but being able to see what is going on helps greatly. We marveled at the strange things on sale (human teeth anybody?) and then went in search of Mechoui Alley, or Lamb Alley as it’s often known. This was a recommendation from our friend Hannah, a very trustworthy person when it comes to food recommendations.

Mechoui Alley is a small alleyway just off the main square where one can buy cooked lamb and not a lot else. We pushed our way into the alley and surveyed the scene. Four or five small stalls (kind of like a restaurant but not) had clay pots sat out front. A couple of them also had a large flat surface upon which they had a big pair of scales and and a whole cooked lamb. People were pointing to whatever area of the lamb they wanted and the shopkeeper would then tear a hunk off and weigh it to calculate a price. There seemed to be different prices for different “cuts”. The smell was incredibly mouth watering so we opted for a pot of lamb and found a table.

The food arrived and it was some of the best lamb we have ever had. Absolutely delicious but in true Claireandmarkgotravelling style it was definitely not visually appealing. In fact it looked awful. 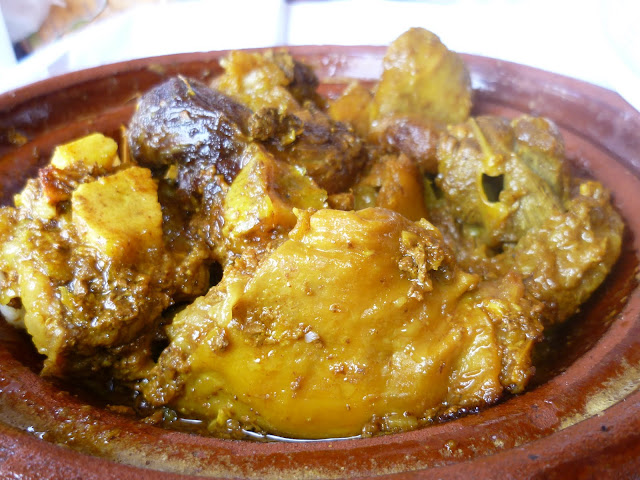 That’s 100% lamb that is. We ate it with our fingers and some bread and the taste was incredible. Pretty much all meat in Morocco is free range as that’s just the way they roll. We saw endless shepherds with their flocks just meandering around the countryside and chickens seemed to roam free wherever we went. This is the alley itself and as you can see it is a crowded affair. And once again an angry woman spots me and my camera. 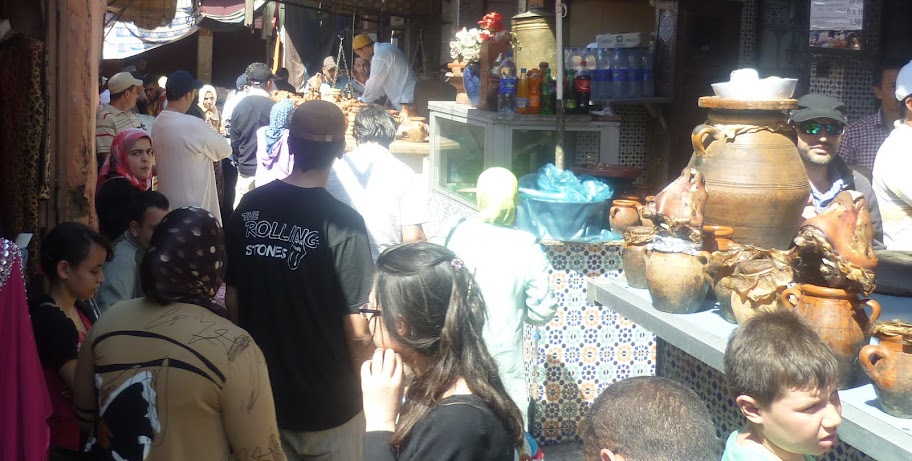 After that we hit the souqs. These are basically covered markets but they are more like covered alleyways. Though it’s easier to just think of them as mazes full of people trying to sell things. But they are amazing places to explore and the goods for sale are out of this world. Lots of shiny metal things and a lot of cameras that have been liberated from their owners over the last few decades. We got well and truly lost. 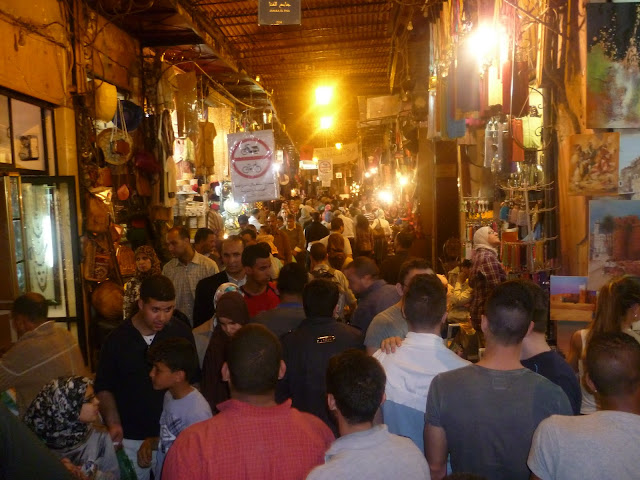 Which brings me to another observation of Morocco and one that is particularly prevalent in the souqs.

If you make the mistake of looking even slightly lost somebody will come to your rescue and lead you to where you want to go. Then they expect to be paid and what you offer is always an insult to them so you feel obliged to pay more. Sometimes they just lead you to their cousin’s shop too. Which inevitably means carpets.

So what you end up doing is desperately trying to look like you know exactly where you are going. So no map in hand, no looking for the non existent street signs and no asking for directions. Though one supposed trick we gleaned from our guide book was to ask for direction from a shopkeeper, the theory being that he is unable to leave his shop. But this didn’t work as there is always a chancer within ear shot happy to offer help at a rate of about £4,000 per hour. 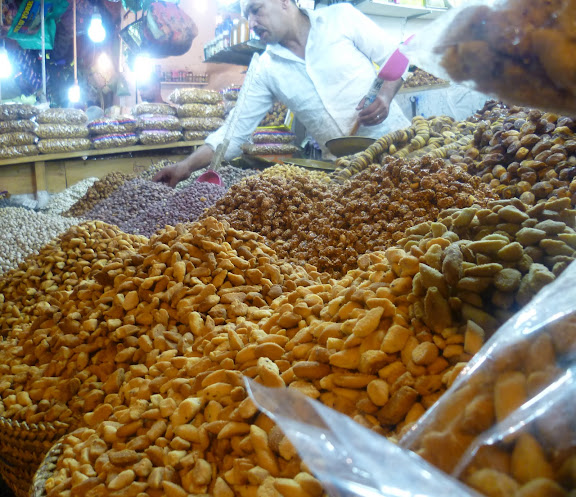 So we got more and more lost before amazingly finding our way back to Djemaa-el-Fna again.

That evening Claire had booked us into a nice restaurant so we could celebrate my birthday. We got smartened up (Claire successfully and me less so) and headed to the restaurant. The taxi not surprisingly got fed up with the crazy traffic and dropped us off a few hundred yards from the restaurant and we made the mistake of getting out and looking lost and confused. Out of nowhere a chancer appeared and we just paid him after he led us in a perfect straight line down the street we started on. He could have just said “it’s down the road on the right mate” but he had to earn his wage.

The food was good. Very imaginative with a fusion of French and Moroccan styles and we left absolutely stuffed. Thanks to Jo for another spot on recommendation. You retain your 100% recommendation record!

Our plan (in the loosest sense of the word as usual) was to go on a 2 night tour to the Sahara from Marrakech. We had done some research as to which tour company to use before we left and found them to be shocking at responding to emails. When we arrived at our riad we realised it was on the same road as one particularly well reviewed tour company. So on our second day in Marrakech we went looking for their office. Three times in fact, and when we eventually found it late in the day it was closed up. We gave up plan A and decided to make a new suitably vague plan.

Next we went in search of the Saadian Toombs. I was quite excited about seeing these. To summarise, these tombs are pretty big and were sealed up in about 1600. It wasn’t until an aerial photograph was taken of them in 1917 that it was realised that access was possible. In my mind I pictured a myriad of mysterious passageways. In reality it was pretty naff. Undoubtedly the tombs are somewhat of a masterpiece but it was all a bit underwhelming. We also got queue jumped by a Frenchman. Rather than glare at him I “accidentally” pointed at things when he tried to take photographs. He has lots of pictures of my arm and pointing hand now. Here is a very average photograph of the tombs which we queued to take. 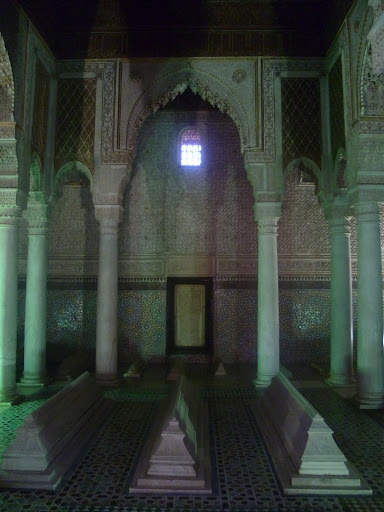 The other thing we did on our second day was to go to the hamam for the “treatment” we arranged the day before. This was quite an experience. We had both arranged the traditional hamam treatment and then a massage each. The hamam bit was painful for the most part. In summary a woman threw buckets of water at us, soaped us up and then using a glove that was very much like a brillo pad she scrubbed our entire bodies very hard. Then she threw some more buckets of water at us before whacking the heating right up and leaving us to sweat on a plinth. Suffice to say the massage afterwards was much more pleasant.

For our final evening in Marrakech we decided to go in search of some classic cheap backpacker food. I did a bit of research and stumbled upon some internet mentions of Fast Food Alahbab. It was easy to find as it was just off the main square. The main fast food in Morocco seemed to be the Shwarma and this was FFA’s main offering. Shwarma is very simply meat on a spit, much like you see in a kebab shop window in the UK. But the quality of the meat is so much better in a shwarma. The meat is either served in a bread like a pitta or on a plate with an assortment of salad and rice. We opted for the latter as shown below along with our chef. The one on the left is chicken and the other is mystery meat. 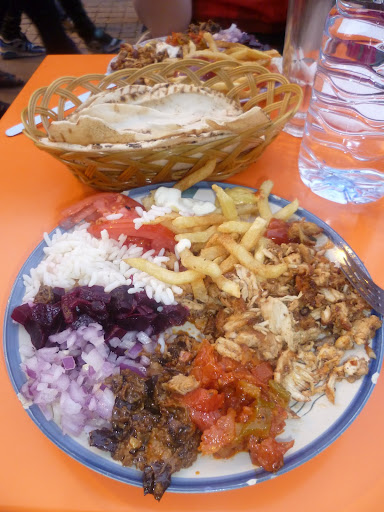 We followed the shwarma with a cake from the most confusing shop we have ever bought from. We chose our cake, got given a ticket, found a table, gave the waiter our ticket and then waited for him to bring us our cake. Then paid at the end. Imagine trying to work that out without the power of conversation! Then we walked the food off  in the main square before heading back to finalise our revised but incredibly vague plan for the remainder of our trip.

We loved Marrakech. It is so vibrant and at times almost surreal, and the food is great too. And it is probably the closest city to the UK that is really different in almost every way. If you have a chance to visit make sure you do. You won’t regret it.