When you make things up as you go the accommodation can be a little hit and miss. We are far from fussy though.  We have after all slept in a shed, a blood stained concrete cell, battled bed bugs for 6 days straight and slept on a number of South American buses.

But for every really bad hotel there seems to be an absolute stunner. And we certainly struck gold in Asilah.

Asilah is a town on the northern Atlantic coast of Morocco, just a few miles south of Tangier. Amongst its other redeeming features it was also a Spanish Protectorate as recently as 1956 and as such a lot of the people in Asilah speak Spanish. Which would give me the chance to dust off my South American Tourist Spanish, rendering searches for the toilet, bus ticket buying and donkey related chat much easier. Oh, and it’s bloody easy to get there from Meknes too.

The train journey took about 4 hours and again we went first class. For the first part of the journey we shared the compartment with 2 French tourists who spent the whole time passing their mobile phones backwards and forwards to a Moroccan woman. When they got bored of that they tested out their limited English on us. Then they all got off and were replaced by a young Moroccan couple who proceeded to quash our understanding that Moroccans don’t do public displays of attention. Thankfully we reached Asilah before they got really carried away.

For our time in Asilah we had booked a room at the guest house Christina’s House. It took a little finding but courtesy of a very helpful chap who spoke Spanish we arrived. Immediately we knew we had made a great choice. Our room was lovely, the shower was amazing and the crowning glory was the greatest roof terrace I have ever had the pleasure to laze around on. It didn’t take us long to book an extra night and extend our stay to 3 days. It isn’t often we stay still for so long. 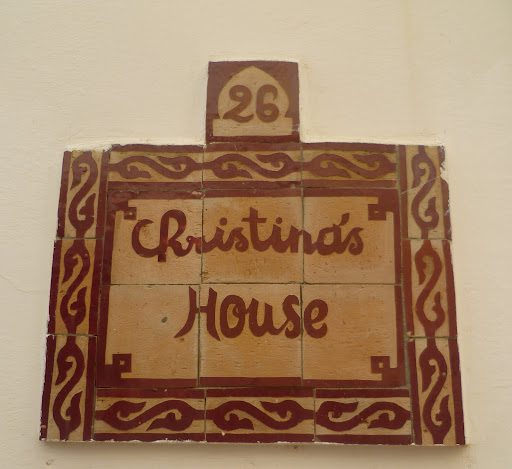 On our first full day we walked to the promisingly named Paradise Beach which was about 5km south of Asilah. We have seen some pretty amazing beaches so this one had a lot to live up to.

The walk was an experience. The first kilometer or so was spent clearing the edge of the town. Sadly the edge of town seems to be where the town deposits it’s rubbish. This isn’t a problem that is unique to Morocco though as some of the greatest places we have seen are blighted with litter. The edge of Salar de Uyuni in Bolivia and the Perhentian Islands in Malaysia spring to mind.

After we we had got further into the walk things improved. The terrain was pretty challenging with lots of ups and downs and at times we had to clamber over rocky terrain. After passing a partially built golf club we eventually caught sight of Paradise Beach.

It wasn’t entirely clear as to how we would get down to the beach but a local fisherman walked past us and we followed him in the hope he was going to the beach also. He was, but his route down looked precarious. We had a slightly confusing conversation in Spanish and eventually realised that he was warning us that the route he was taking was safe at that moment but later the tide would come in and cut it off.

He proceeded to skip down the steep and precarious descent like a mountain goat and we followed carefully. This is where we climbed down. 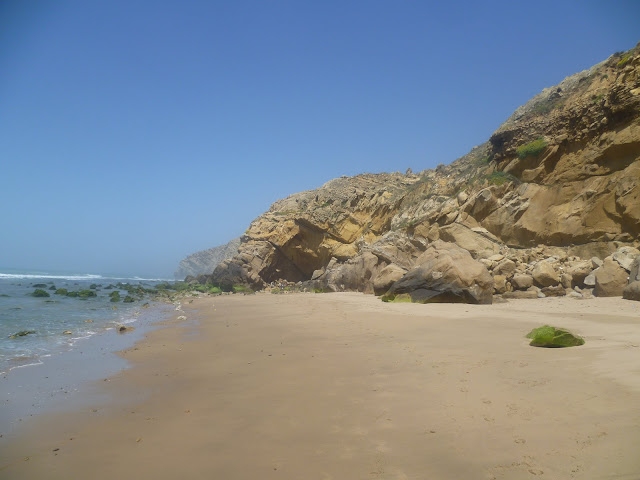 The beach was rather impressive although a little blighted by litter in places. We are told this tends to be cleared up during the busy season but at this time of year the beach is almost empty of people, which is how we like our beaches.

After walking for a while we stumbled upon a tiny shack with a few chairs scattered close by. We took a seat and a guy came and asked if we wanted a drink or some food. We asked for a Coke and he walked into his shack. Three minutes later he returned and told us he only had mint tea. Presumably he had forgotten that he only had one drink. It was way too hot for tea so we walked a little further and took a dip in the sea. It was cold but wonderfully refreshing.

As there was no food available at the beach we headed back to Asilah for lunch, and found somebody else’s lunch sunbathing on the way. 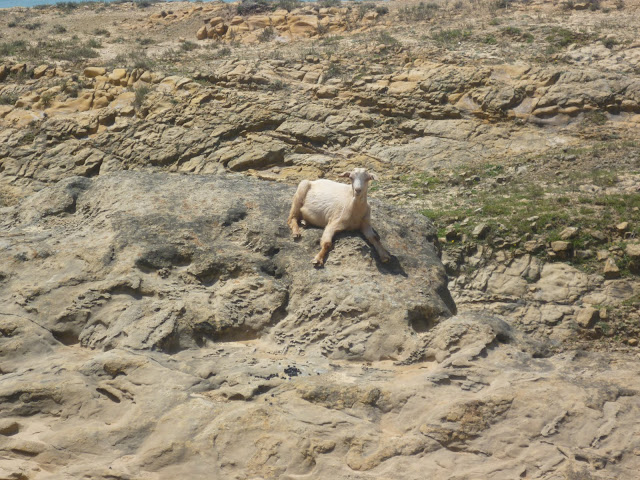 Lunch was good and to be honest I expected nothing less from the wonderfully named Restaurant Sandwich Pyramid. 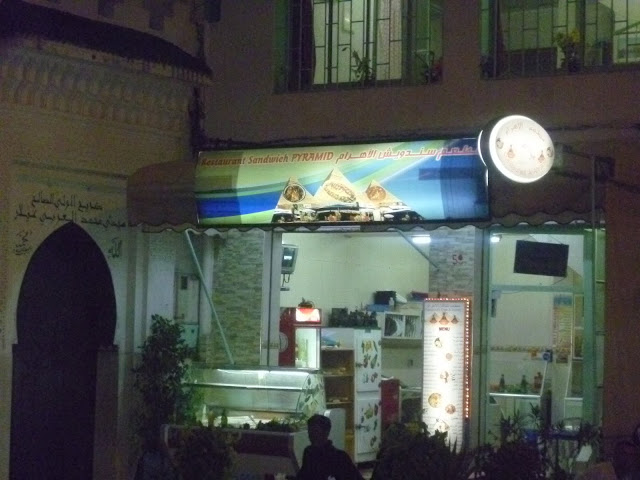 We were pretty exhausted after the walk so retreated to the roof terrace at Christina’s House. This is pretty much where I stayed for the next few hours until my Kindle died. 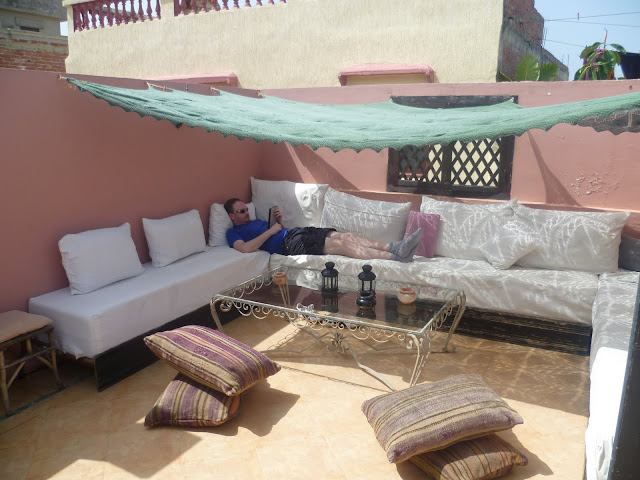 The next day we decided to do something unusual for us. To do absolutely nothing blogworthy. But that didn’t work and after a couple of hours lazing around we went for a stroll in the medina. The medina at Asilah is the finest we saw in Morocco. It is only small but a real pleasure to explore. In 1978 some local artists were invited to hold some workshops for local children and at the same time they painted some murals on the white walls of the homes within the medina. This is now a bit of a tradition and the effect is quite striking. 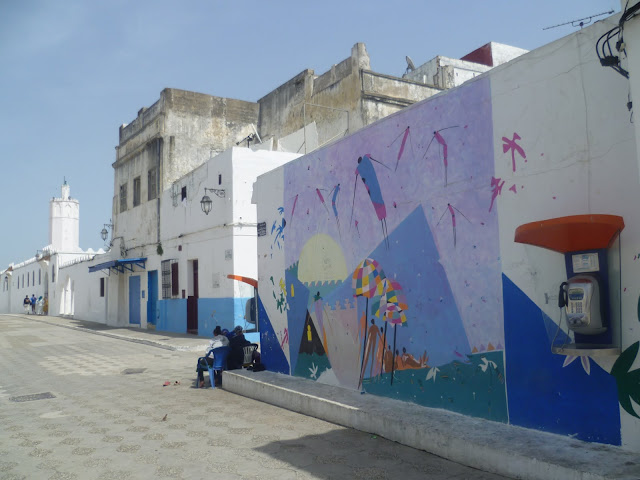 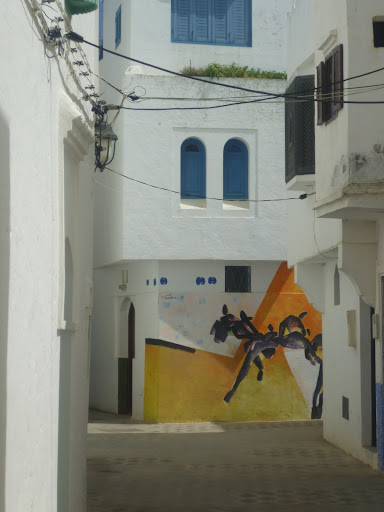 The white walls with blue doors and window shutters seems to be traditional as most houses followed this colour scheme. This shop in particular, something that proves popular with cats. 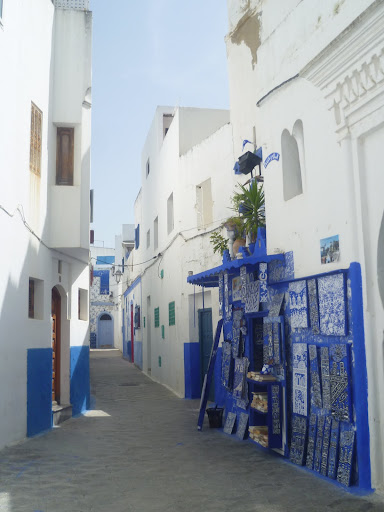 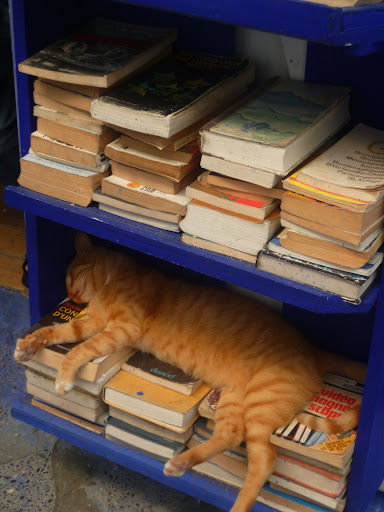 Eventually we found our way to a small pier and sat taking in the stunning view and the sun set. 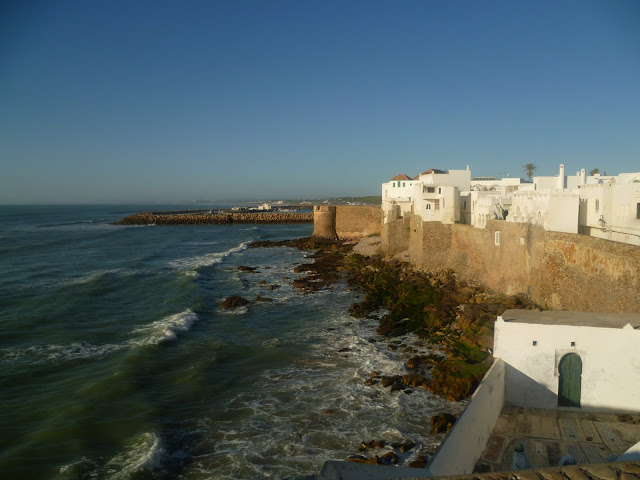 Having exhausted ourselves exploring the medina we again retreated to the roof terrace for some relaxation before mustering the energy to go for a meal in town. We had seen a lot of young people fishing both on the way to Paradise Beach and around Asilah. On the way to the restaurant we saw a few young guys selling their catch in town.  It must be great to be able to buy such fresh fish cheaply on your doorstep. 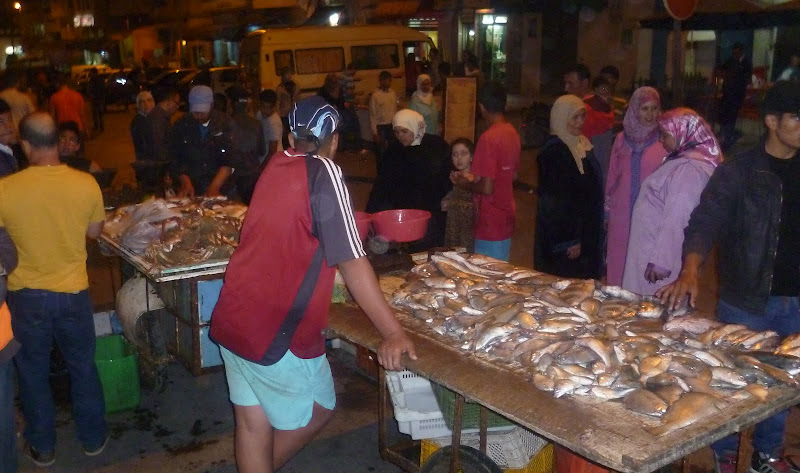 After 3 nights in Asilah it was time to leave. We wanted to have time to explore Tangier before crossing the Straits to Spain and Gibraltar. Asilah is a great little town with such a relaxed feel to it. It is exactly the sort of place I could see myself living for a while.