Tangier has an intriguing history but in more recent times has not been great for tourists. But efforts to clean things up a bit got us interested in spending a day exploring.

We were advised to take a shared grand taxi from Asilah and I must admit to being quite excited at the prospect of another crazy journey. But upon our arrival at the street corner where the grand taxis accumulated passengers were a little scarce. This put us at a disadvantage for the negotiations and it didn’t take long for the drivers to talk us into taking a whole taxi to ourselves. In the grand scheme of things though it wasn’t that expensive. Our driver provided a little of the special Grand Taxi excitement by driving his Mercedes 240 like he stole it though.

We arrived quite early at our hotel in Tangier and whilst they readied our room we went in search of Tangier’s famous medina and souqs.

Which leads me to diverge again for a little history. Morocco was once shared between Spain and France, but Tangier was just way too important so a few countries got together and divided it up between themselves instead. So Tangier became an “International Zone”, or as people preferred to call it, the “Interzone”. This multinational structure attracted peoples from many countries and in the end the population of Tangier was 50% foreign. It also led to it becoming a fancy free “anything goes” type of place and was renowned for it’s artists, drug addicts, spies, sexual deviants, exiles, heavy metallers and all sorts of other weirdos.

When the city was handed back to the now independent Morocco in 1956 the city went (further) downhill and was soon nothing but a dreary port town with a large criminal element. Then in 1999 the clean up started.

Which meant that we had a great time wandering in the medina. Of course we got royally lost in about 6 minutes but, as always a chancer was close by. His name was Yussuf and he was about 11 years old so we happily let him do his thing. Which was to lead us on a dizzying whirlwind tour of the medina. First we got to see this view across towards Europe. 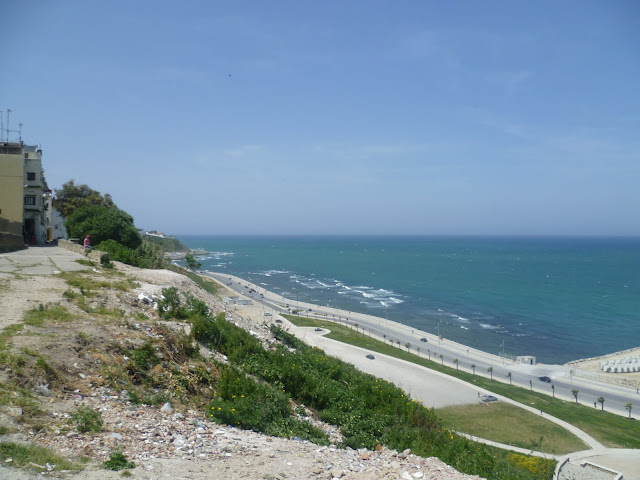 And then he did what all good Moroccan chancers do and took us to his dad’s/brother’s/cousin’s restaurant. Which was good because we were hungry. As we sat and waited for our food we saw tourist after tourist being delivered to the restaurant by their “guide”. We soon realised that we were sat in the most touristy eatery of our trip. But the food was ok, and typically ugly.

When we had finished the owner of the restaurant told us of a Berber market that was in the medina for only one day. He insisted that we absolutely must see it and offered the services of his son to take us completely free of charge. We went with it and soon enough found ourselves in his uncle’s/brother’s/cousin’s shop. We seemed unable to halt our progress up some stairs and into another bloody carpet room. But as he began to unroll the first carpet instinct kicked in and we told him “no carpets!”.

We retreated downstairs to look at the other gear. Eventually Claire took a fancy to a bracelet and we entered into some bargaining, which went something like this :

I quite like bartering but I don’t think I am greatly suited to it. I lack the patience a lot of the time. In Morocco they always start really high and bartering is expected and quite light hearted. In other countries less so.

As we left, the shop keeper offered us the services of his son to take us to a special spice market presumably run by his brother/cousin/uncle. We declined.

And then promptly got lost when searching for a museum that I really fancied seeing, the Tangier American Legation Museum. We eventually found it but discovered it was closed due to it being Saturday. Lazy Americans. But our inability to enter is no reason for me to not tell you about it. 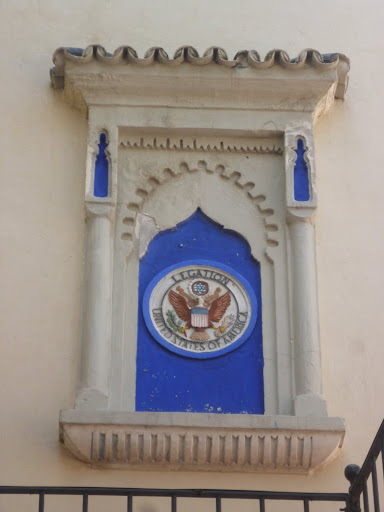 Morocco was one of the first countries to recognise the USA back when the Yanks had a crazy notion to go it alone in the world. And they share the same inability to use roundabouts of course. As such this building in Tangier was the very first American territory on foreign soil. As a result it is the only US National Historic Landmark outside of North America. And from the outside it looked very underwhelming.

So we went and got lost again before eventually finding our way out of the medina and back to the hotel. Our hotel had a nice pool so whilst Claire relaxed at the pool side I swam. I am quite a noisy swimmer…a bit like an unnatural blend of a whale coming up for air and a giraffe drowning. The resultant noise clearly annoyed the other people round the pool and a couple got up and left so I thought I’d better get out.

A bit later on I asked the chap on the front desk how we would go about getting our tickets to go to Spain the next day. He looked at me with a shocked expression on his face and said “but tomorrow is Sunday”. My heart sank. Had we made a critical error? Were we stranded in Tangier? Would we miss our flight home? Nope. He went on to explain that we could take a taxi to the port and buy a ticket for the next available ferry. I still have no idea why it being Sunday shocked him so much.

Later in the evening we headed out for our final Moroccan food. We chose a nice schwarma restaurant full of locals. Upon entering we came up against a common traveller peril. Sometimes it is really hard to work out how you order food. Do you sit down and wait to have your order taken? Order at the counter and pay immediately. Pay later?  Arrghhh!

We usually watch for a couple of minutes to see what locals do but annoyingly none turned up. Eventually I collared a young guy working there and with the power of gesture and a look of hunger on my face he realised what I was asking. He spoke to his boss who just shook his head and pointed at the counter. But the young guy was clearly destined for greater things. Seeing how confused we were he proceeded to give us full on table service in what was quite possibly the Moroccan equivalent of McDonalds. What an absolute legend. We tipped him well.

On the way back to the hotel we spotted a wonderful looking cake shop and couldn’t resist. The woman in front of us in the queue overheard our shocking attempts to explain what we wanted. She offered to help out. She spoke good English and when I complemented her on her grasp of our language she explained that she was from London and had lived there for 30 years. In my defense she still looked extremely Moroccan.

And that was about it for Morocco. We took an early taxi to the port, waited around for ages and set off for Europe.

So what did we think of Morocco? We loved it. It is beautiful, dirty, easy going, challenging, diverse and crazy. The food was a bit hit and miss and often ugly looking but the lamb of Mechoui Alley was wonderful (and ugly) and I am now addicted to olives. The people are helpful and friendly too. Sometimes a little too friendly but rather this than the opposite.

Many people would probably have some reservations about the religion in Morocco. But it really isn’t an issue if tourists are respectful. In fact the religion is one of the most interesting aspects of Morocco. The way people interpret and practice their religion is so varied, and the sound of the call to prayer from the many mosques becomes almost comforting after a while.