I can’t quite explain it but it felt almost a relief to be back in Europe. Almost like common sense had resumed and everything was a bit more predictable. For one thing it seemed very novel that drivers stopped for pedestrians at the zebra crossings. I gave th cars a distrusting look for a while, as if I half expected them to lunge forward as soon as I set foot on asphalt.

The ferry journey from Tangier took much longer than expected. We were supposed to depart at noon but actually set sail at 1:30pm. The crossing then took another 90 minutes. The boat was eerily quiet as there were few passengers. Around the time we set off I found myself drawn to the restaurant and despite seeing a number of half eaten and abandoned plates of chicken and rice I strangely ordered chicken and rice. And then abandoned it because it was terrible.

Shortly after departure I glanced out of the window and saw something flapping around in the sea. After a few seconds I realised it was a dolphin and then I noticed lots of other dolphins. They put on quite a display jumping out of the water and generally just mucking about. It was quite a surprise as I had no idea there were dolphins in the Straits of Gibraltar. It turns out there are in fact three types of Dolphins in the Straits. By the time Claire returned they had gone though and I suspect she thought I was on a wind up…until she saw the dolphin tour boats in Gibraltar that is.

We docked in the Spanish port of Algeciras and had to make our way to La Linea de Concepcion where we had booked a hotel. As this was our last bit of backpacking we went in search of the bus station. Our ability to travel by bus is one of our greatest backpacker skills. I reckon we must have clocked up about a month of bus time in the last 2 years. My limited Spanish just about helped and in not a lot of time we were on a local bus. As we slowly made our way around the bay we could often see the looming rock of Gibraltar in the distance. It really is an impressive sight.

After checking in we headed out for some tapas. The tapas turned out to be more confusing than any Moroccan eatery. We sat at a table and as we ordered a few dishes the waiter started to explain (in Spanish) that there was a problem. It turned out that it was simply not possible to serve tapas on a table and we must sit at the bar. So we did, and the tapas was good, especially the ham.

On the way back we found a cake and ice cream shop and devoured massive ice creams. So much so that an unassociated restaurant sent a waiter out to me with napkins, to aid with the melted ice cream that was running down my arms by this point.

The next day was our day for exploring Gibraltar. I felt strangely drawn to Gibraltar as it sounded a bit weird. Red phone boxes, monkeys, Marks and Spencer and lots of sun. Just getting across the border from Spain is an experience. The passport control was nearly as lackadaisical as our crossing into Bolivia. I held my passport up and the guy didn’t even look at it. Which seems strange because the Spanish want Gibraltar back, and the border only re-opened in the 80’s.

Then we had to walk across the runway of Gibraltar International Airport. Normally I would go and find some aerial photography to show something strange like this but instead here is a shot I took from atop the Rock. La Linea is in the distance on the other side of the runway. As you can see the road runs straight through the airport. 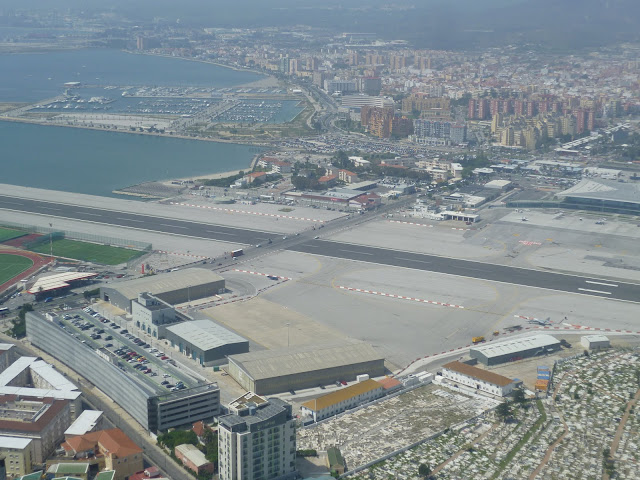 Just moments after reaching the main town in Gibraltar we found ourselves in a pub, and as we pride ourselves in eating local food we ordered a fry up. Then we strolled down the high street. It looked and felt just like the UK aside from the amount of Spanish being spoken and the amount of cigarettes being smoked. 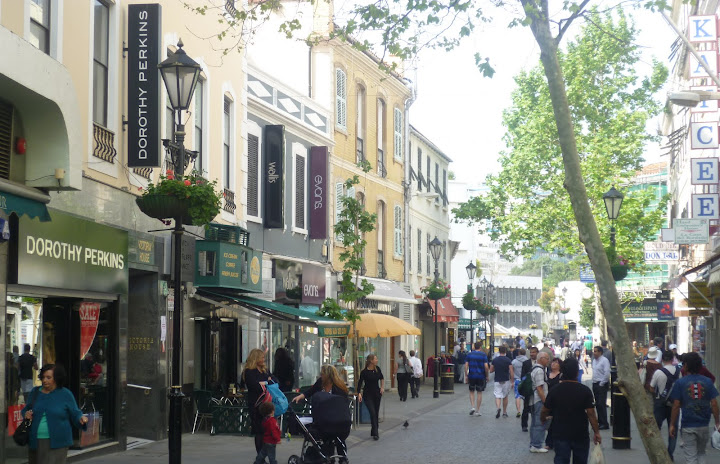 The strangely familiar Britishness felt a bit too weird in fact so we went and found the museum and soaked up some history instead. I hadn’t realised just how much history Gibraltar has, especially of the war kind. And it turns out the very first Neanderthal skull was discovered in Gibraltar too but somebody stuck it in a box and thus Belgium stole their glory when they found one. It isn’t often that Belgium steals glory from anybody though so we let them have this one.

Then we caught the cable car up the Rock and went exploring. First we went to St Michael’s Cave, which was much bigger than we expected and rather spectacular. Note that all the colours are not natural. 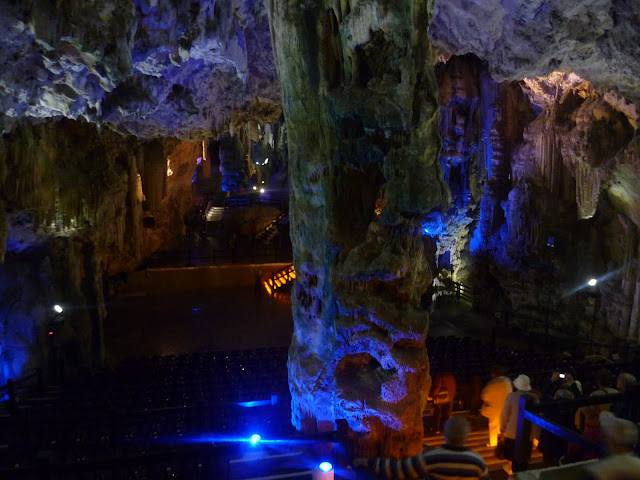 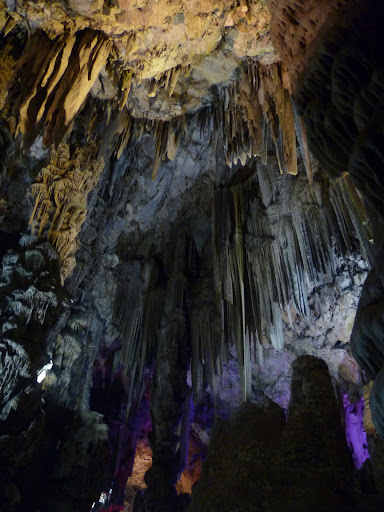 After leaving the cave we checked out some of the famous Gibraltar Apes. From a safe distance. We saw monkey teeth up close in Borneo! But what I was really interested in on the rock was the war tunnels. You can see the windows of the tunnels from below the rock and it is easy to appreciate the amazing vista the tunnels would give the island’s defenders. Which is pretty handy as the Rock has had to be defended a lot over the last couple of hundred years.

The Rock apparently contains over 30 miles of tunnels, which I believe are longer than all of the roads in Gibraltar. The tunnels contained a hospital, power station, water works and the rock as a whole had enough other space to be home to 20,000 troops during the Second World War. We didn’t get to see much of that but we did see the tunnels built in the 18th Century during the Great Siege. Back when the American’s were claiming their independence, the pesky French and Spanish tried to catch us unawares and take Gibraltar. They failed. And with canons in commanding positions like this I can see why. 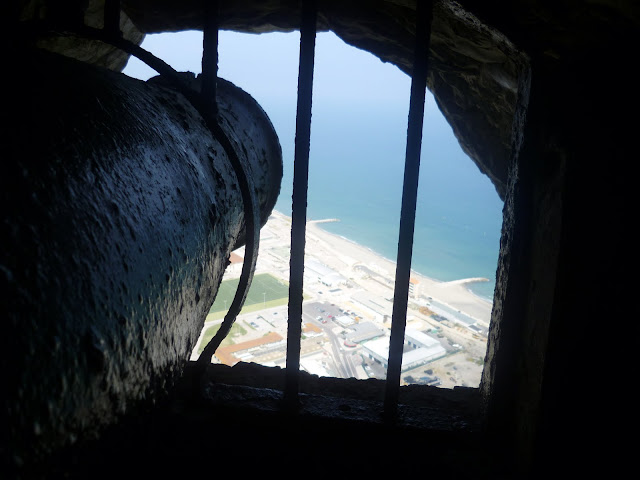 Initially the plan (not ours, the British military. We don’t do plans remember) was to tunnel through the rock to an outcrop called the notch, upon which a canon or two would be placed. Soon enough though they had the great idea of opening windows from the tunnels and thus they could then install many canons. There were fourteen sieges and the last was over 3 years long. The British held out every time. The photograph of the airport up top there was taken from these tunnels. The views were brilliant. 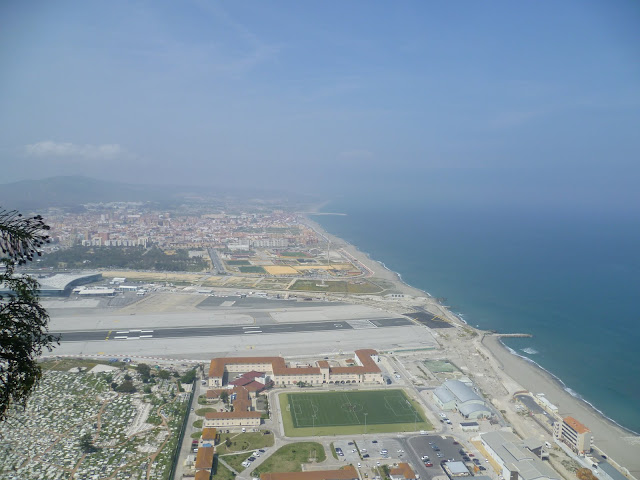 As we approached the border on our way back to our hotel I decided to test the attentiveness of the border control. As a result of this test I can confirm that a blank page of a passport carrying only a Machu Picchu visitor stamp is adequate to enter the Kingdom of Spain.

That night we decided to splash out on our final meal. Two huge Spanish sirloin steaks were devoured along with a large amount of olives. When we ordered the steaks the waiter asked if we would be sharing one steak. We looked at him like he was a fool and asked for one each. On reflection he was asking for a very good reason. They were rather large. And delicious.

The next morning we had nothing to do but fly home.  Which meant crossing the border again. This time we decided to swap passports and as I drew close I became incredibly reckless. As I passed the border guard I showed him the front cover of Claire’s passport upside down. He waved me through. Unbelievable.

We had an amazing time in Morocco and beyond. Once again we have proved to ourselves that cramming as much as possible into a holiday is at the very least a good way of slowing down the passage of time. Our 16 days seemed to last much longer. Our thoughts now turn to our next adventure. Any suggestions? Destinations must be crazy, dirty, mysterious, illogical, beautiful, rewarding and preferably very amusing. Thanks for reading, and if you want to know the minute we set off again click the follow button over there on the left and we will let you know.